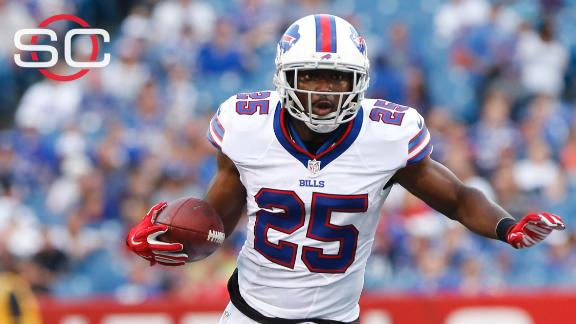 Buffalo Bills running back LeSean McCoy limped to the locker room with an apparent left leg injury during Tuesday's joint practice with the Cleveland Browns.

McCoy, 27, has a strained hamstring and is set to undergo an MRI to determine the extent of the injury.

Bills coach Rex Ryan said McCoy's hamstring is intact and that no separation from the bone occurred.

McCoy reached for the area near his hamstring after a play about halfway through the practice. He briefly sat on the ground, surrounded by trainers.

The Bills were down to two healthy running backs by the end of practice: undrafted rookies Bronson Hill and Ricky Seale, who was signed Tuesday.

In other injury news, wide receiver Percy Harvin is expected to miss at least a week after his hip soreness "never really responded" the way the Bills wanted, Ryan said Tuesday.

Harvin, who has been out of practice since last Wednesday, could miss at least another week of preseason action after the Bills gave him a platelet-rich plasma (PRP) injection.

"He's so itching to get back, and that's why we sped it up," Ryan said. "We were going to wait four days to give him the shot. We gave it to him early. Hopefully, he responds on it."

Ryan said the Bills "are shooting" for Harvin to return for Buffalo's Aug. 29 preseason game against the Pittsburgh Steelers, but if he isn't able to play by then, the Bills want him to play in their preseason finale, Sept. 3 in Detroit.

"He doesn't want to go into [the regular-season opener] with no game work," Ryan said. "He's trying to get back on the field."

Ryan said Sunday that he expected Harvin to return for Monday's joint practice with the Browns, but Harvin was not on the field for practice on Monday and Tuesday.

Ryan offered an update on the mystery condition of Williams, who underwent a "procedure" after being hospitalized Monday and will be out at least two weeks, Ryan said.

The first-year Bills coach declined to specify Williams' procedure but smiled, calling it a "sensitive thing" and pointing toward his lower abdomen.