Leslie Frazier: 'I love both of them' 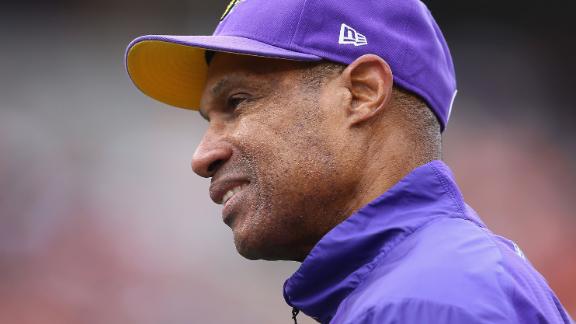 EDEN PRAIRIE, Minn. -- During his time as the Minnesota Vikings' head coach, Leslie Frazier had contrasting relationships with the two star players on his offense: Adrian Peterson and Percy Harvin.

The Vikings traded the talented yet mercurial Harvin to Seattlein March 2013 after a season in which he screamed at Frazier on the sideline in November and reportedly had an altercation with the coach before the Vikings put him on injured reserve with a sprained ankle during the middle of their playoff push.

Peterson, on the other hand, was the Vikings' most vocal player in support of Frazier when the coach's job was on the line last December; Peterson said after the Vikings' final two games of the season that he wanted Frazier back, at one point adding he wanted to play for the coach for the rest of his career and saying he planned to share his thoughts with ownership. After the Vikings fired Frazier on Dec. 30, Peterson said there was a time where "I wasn't happy. I wasn't feeling good about being in Minnesota at the end of last season."

The circumstances for both players, of course, have changed significantly in recent weeks. Peterson is awaiting a Dec. 1 trial after pleading not guilty to child abuse charges, and Harvin is preparing for his first game with the New York Jets after the Seahawks traded him last week.

Frazier is now the defensive coordinator for the Tampa Bay Buccaneers, who play the Vikings on Sunday. In his weekly news conference with Tampa reporters on Thursday, Frazier offered his support for both Peterson and Harvin.

Frazier was one of the few people who knew Peterson had planned to propose to his longtime girlfriend, Ashley Brown, last summer, and the two have remained in touch since Frazier left Minnesota. On Thursday, Frazier said, "I don't know if there's a superstar that warrants the accolades more than [Peterson] does.

"From my standpoint as a coach, he was what you'd want to see in a superstar player: practiced hard, gracious to his teammates. It was never about him. Percy -- tremendous player, tremendous playmaker. We didn't always see eye to eye on some things, but we both wanted the same thing for our team, and that was to win. Great competitors, and guys I have a lot of respect for."

If there's any extra motivation for Frazier to beat the team that fired him, one season after he took the Vikings to their first playoff appearance since 2009, he didn't express it on Thursday.

"When you're sitting at 1-5 as a team, that overrides everything," Frazier said. "You look at where our division is, and you realize that this win could get us started. That really supersedes everything else -- our being able to get a win on Sunday. That would be so good for our team and what we're trying to get accomplished this season."