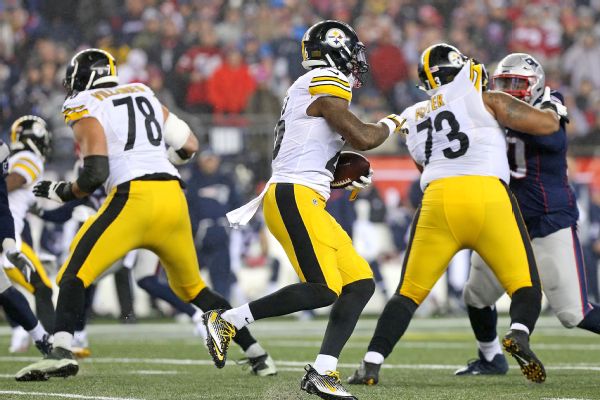 FOXBOROUGH, Ma. -- Pittsburgh Steelers running backLe'Veon Bellexited Sunday's 36-17 AFC Championship Game loss to the New England Patriotsin the first half with a left groin injury and did not return.

The 24-year-old was initially knocked out in the first quarter, then returned for one second-quarter carry of 2 yards. He then went back to the sideline and remained there for the rest of Pittsburgh's scoring drive (which culminated in a field goal), with no helmet and wearing a jacket.

He returned to the sideline in the second half but never took the field, finishing with 20 yards on six carries.

DeAngelo Williamsrushed for 34 yards on 14 carries and a touchdown in relief of Bell.

Coming into the game, Bell had rushed for a combined 337 rushing yards in the 2017 AFC playoffs, an NFL record for a running back's first two career playoff games.

Bell hobbles off after getting tackled
Le'Veon Bell gets bottled up at the line and hobbles off after the play with a leg injury. He would return later for one snap before missing the rest of the game.
Related topics:
sportsespnquestionablenflgroin injuryafc title gameafc championship gameleveon bellpittsburgh steelers
Copyright © 2020 ESPN Internet Ventures. All rights reserved.
More Videos
From CNN Newsource affiliates
TOP STORIES