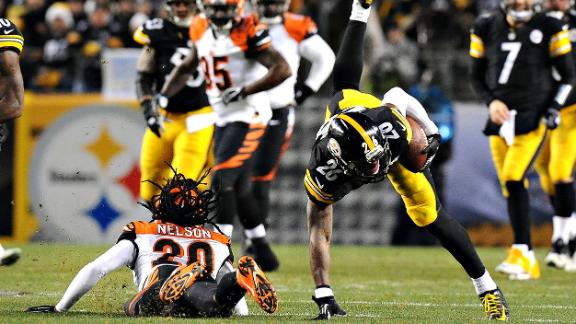 PITTSBURGH -- An MRI did not reveal any ligament damage to the knee that Pittsburgh Steelers running back Le'Veon Bell injured Sunday night in a 27-17 win over the Cincinnati Bengals, a source told ESPN.

But Bell will have to play through considerable pain if he is able to suit up Saturday night against the Baltimore Ravens, the source said, making the second-year man questionable at best for the prime-time AFC wild-card game at Heinz Field.

"I know if there is a chance he can be out there he's going to be," quarterback Ben Roethlisberger said after the Steelers' win over the Bengals, "because that's how he is."

Running back Ben Tate, who was released by theVikingslast week,will visit the Steelers on Tuesday, a league source told ESPN. If the visit goes well, the Steelers expect to sign him.

Tate, who formerly played for the Browns and Texans, played in just three games for Minnesota, totaling 13 carries for 38 yards. Prior to that, he rushed for 333 yards -- averaging 3.1 yards per carry -- and four TDs before he was waived by Cleveland this season.

Rookies Dri Archer and Josh Harris are the only other running backs on the Steelers' 53-man roster, and the two have 19 carries and 56 rushing yards between them. Harris had a 59-yard run against the Bengals called back because of a holding penalty.

Bell left the game Sunday night with a hyperextended knee after taking a direct hit on his right knee from Bengals safety Reggie Nelson following a 19-yard catch in the third quarter.

Coach Mike Tomlin said after the Steelers won the AFC North for the first time since 2010 that Bell that did not appear to sustain any structural damage. Bell was one of the last people out of the Steelers' locker room, and his injured knee was packed in ice, though he did not have a brace on it or walk with crutches.

The Steelers did not take objection with Nelson's hit even though he and Tomlin exchanged words after the game. Tomlin said there was misunderstanding between him and Nelson, and the latter called his hit on Bell "a football play."

Bell has played in 29 consecutive games since missing the first three contests of his rookie season because of a midfoot sprain. Bell led the AFC with 1,361 rushing yards this season and caught 83 passes, a Steelers single-season record for running backs, for 854 yards.