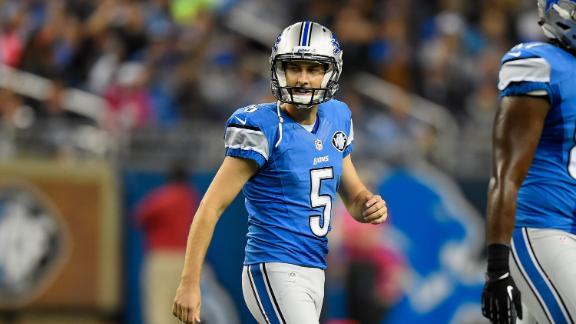 ALLEN PARK, Mich. -- Maybe the third time will be the proverbial charm for the Detroit Lions in the kicking department this season.

That's what Detroit is hoping for now after releasing kicker Alex Henery on Monday -- the second kicker the team has cut in three weeks. The Lions brought Henery in two weeks ago to replace rookie Nate Freese, who the Lions drafted in the seventh round in May.

Neither one has worked out as Detroit has gone a combined 4-of-12 on field goal attempts this season, including three misses from Henery on Sunday during a 17-14 loss to Buffalo.

"It's one of those things we'll look at it closely and we've got to find a performer," Lions coach Jim Caldwell said. "That's basically what we have to get done. In that area you've got to get a guy who is consistent under pressure and will be able to get us some points on the board."

Points have been a problem for Detroit from its kicking spot. In converting just 33.3 percent of their kicks this season, the Lions are one of three teams since 2001 to have that low of a percentage over five games, joining the 2009 Buccaneers and 2005 Bears. Both teams were 2-of-6 through five games and both had records under .500. The Lions are 3-2.

In looking for a new kicker, Caldwell said experience will be one of the factors the team will look at. Former Broncos kicker Matt Prater and former Cardinals kicker Jay Feely both are scheduled to work out for the Lions on Tuesday, league sources told ESPN NFL Insider Adam Schefter.

Caldwell said the Lions will look into the off-field issues with Prater, who is coming off a four-game suspension for violation of the NFL's substance-abuse policy. Prater has been part of the league's program since getting arrested for a DUI in 2011.

"We'll look at each and every guy and make a determination based upon what we sense and feel about him on and off the field," Caldwell said. "That's how we do every guy. Suitable to the comfort level of all of us that are involved."

Former Saints kicker Garrett Hartley worked out for the Lions when they were looking to replace Freese, along with the late Rob Bironas.

"There's somebody out there for us that will do the job for us," Caldwell said. "We just got to see if we can track him down quickly."

Caldwell said kicking consistency does make a difference in how the Lions call plays and other determinations the team would make. On Sunday, he said Henery's struggles did not come into play in his decision to send him out for a potential game-winning 50-yard field goal that Henery missed.

Detroit has struggled to find a consistent kicker since Jason Hanson retired after the 2012 season. David Akers -- now a free agent -- beat out Havard "Kickalicious" Rugland for the job in 2013 and he made 79.2 percent of his field goals. The Lions did not re-sign Akers in the offseason and drafted Freese to compete with Giorgio Tavecchio.

Freese beat out Tavecchio despite an inconsistent camp but lost his job after three weeks to Henery. So the Lions have had issues identifying a consistent kicker for a while -- and through two coaching staffs, first with Jim Schwartz in 2013 and now with Caldwell in 2014.

"Sometimes it happens that way," Caldwell said. "Just in terms of you can't put them in a game situation and find out everything that you need to know about them. That's an unknown, an uncertainty. But you certainly have to make your best guess and go with it and if it's not, you get it corrected and don't be ashamed to get it corrected, you know, regardless of what happens."

Bills Rally To Top Lions
Dan Carpenter's 58-yard field goal in the final seconds gave the Bills a 17-14 victory over the Lions.