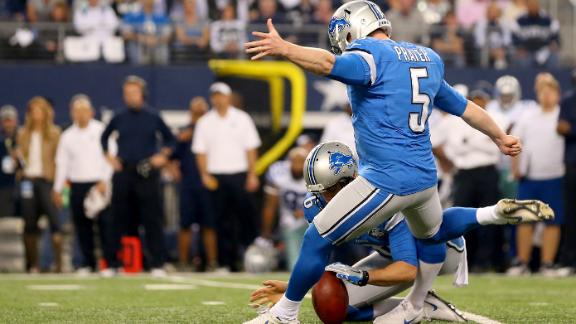 The Detroit Lions agreed to a three-year deal with place-kickerMatt Prater on Friday, meaning the team will have a stabilized kicking situation for the first time since Jason Hanson retired after the 2012 season.

Terms of the deal were not disclosed, but the NFL Network reported that it was for $9 million.

Prater, who holds the NFL record for longest field goal (64 yards), signed with the Lions before Week 6 after serving a four-game suspension for violation of the league's substance-abuse policy. When his suspension ended, Denver cut him and the Lions picked him up after going through rookie Nate Freese and veteran Alex Henery during the first five weeks of the 2014 season.

Prater, 30, solidified Detroit's kicking game, making 21 of 26 field goals this season, including a game winner against the Falcons in Week 8.

"As Matt got more acclimated with us, especially withDon [Muhlbach]and Sam [Martin], he really became someone we could count on and was a positive contributor to our kicking game last season," Lions coach Jim Caldwell said in astatement on the team's website. "Our field goal unit made significant improvement with Matt as the season went on.

"Re-signing Matt was definitely a priority for us. We are excited to bring him back, and we feel that both he and Sam provide us with two valuable weapons in the kicking game."

Prater is the third of the Lions' own free agents to re-sign this week, joining defensive end Darryl Tapp and quarterback Dan Orlovsky.

His signing also brings back the entire special-teams operation from last season, as Muhlbach, the long-snapper, signed a one-year deal last week, and Martin, the punter, is in the third year of his four-year rookie contract.

"We left at the end of the season really hoping that those two are going to get signed," Martin told ESPN on Friday. "So now that that's finally done, it's exciting and awesome. I'm real excited about it. I didn't want to change anything going into this year.