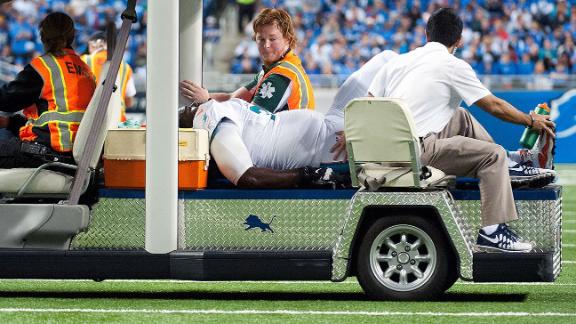 DAVIE, Fla. -- Miami Dolphins Pro Bowl left tackle Branden Albert suffered a torn ACL and MCL in his right knee and is expected to miss nine to 12 months, according to a source.

Miami will place Albert, who was injured in Miami's 20-16 loss Sunday to the Detroit Lions, on season-ending injured reserve.

"That's unfortunate with any player who sustains an injury," Dolphins coach Joe Philbin said. "Branden has been a great addition to the football team and an excellent representative of the organization. Unfortunately, injuries are part of the game."

Albert signed a five-year contract with the Dolphins this past offseason worth a maximum of $47 million. He started nine games for Miami and played at a high level.

"Big, huge [loss]. I don't even know what to say about it," Dolphins receiverMike Wallacesaid after Sunday's game. "That's a humongous loss. He's been a great player and a great guy to haveon the team and in the locker room. But we will hold it down for him, though."

Rookie first-round pick Ja'Wuan James is expected to replace Albert and move from right tackle to left tackle. Miami (5-4) will host the Buffalo Bills (5-4) on Thursday night in what could be an elimination game in a crowded AFC playoff field.