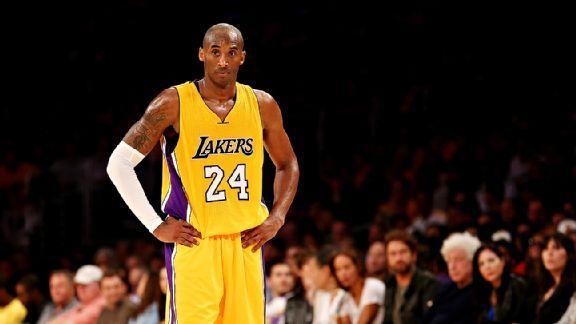 Magic Johnson thinks that the Los Angeles Lakers should get serious about losing.

Johnson, speaking at Steiner Sports' In Their Own Words product launch Tuesday in New York, said he wants his former team to lose enough games to contend for a high lottery pick in next year's NBA draft.

"I hope the Lakers lose every game," Johnson told reporters. "Because if you're going to lose, lose. And I'm serious."

The Lakers owned the second-worst record in the Western Conference and the sixth-worst in the NBA following Tuesday's 98-95 victory over the Kings.

Kobe Bryant scored nine of his 32 points in the final 3:14, leading Los Angeles' fourth-quarter comeback. Carlos Boozer added 15 points for the Lakers, who snapped their three-game skid by rallying from a 12-point deficit in the second half.

After the game, Bryant kept Johnson's thoughts in perspective.

"Magic is one of the most competitive players of all time. He doesn't want to lose. From an owner's perspective, his opinion is to get top picks and to be able to use those as leverage to trade and get a competitive team and so on. From where I'm sitting, I just look at his point of view."

"I don't see teams tanking. It doesn't happen. Maybe there are certain teams in the league -- and this is not one of them -- where ownership sits up there in their office and they're crossing their fingers quietly and hoping," Bryant said. "But the players themselves? Never. Players play. Players play, and players try to win every single game. That's just what we do."

Nick Young, who had 12 points and four rebounds Tuesday, also made light of the remarks.

"I'm going to have to tell Magic to stay at Dodgers Stadium for a while," he joked. "Don't bring that smile around here. I'll do all the smiling for now!"

"That really is easy to say, but when you're behind the scenes and you're in the trenches and you're coaching, that's not something that you want to do," Scott said before the game. "And I don't think our players look at it that way. We've got to go out here and try to win every game possible. If you lose games, it's one thing, but to go out and try to lose, that's a different story. I think that sends a message to those guys in there."

The Lakers landed the seventh overall pick -- used to select Julius Randle -- in this year's draft, and Johnson is hoping for another high pick after this season.

"If you're going to lose, you have to lose because you can't be in the middle of the pack," Johnson told reporters. "You either have to be great or you have to be bad to get a good pick."

Scott said he doesn't worry about external feedback of that nature, even if it comes from someone as popular as Johnson.

"It's more of a laughing matter to me than anything," Scott said. "I know Earvin and how competitive he is, and I understand where he's coming from -- 'Yeah, lose every game and hopefully you'll get the No. 1 pick.' That doesn't guarantee that you're going to get the No. 1 pick. You go out here and try to win as much as you can to try to create that culture of winning again instead of having that loser's mentality. That's how I look at it."

The Lakers are expected to have substantial salary-cap space this upcoming offseason. Bryant, who will make $25 million next season, Young, Randle and second-year forward Ryan Kelly are the only Lakers who have guaranteed contracts beyond this season.

Johnson thinks that the Lakers could turn around their fortunes quickly with the right moves in the offseason -- and another high lottery pick.

"The Lakers are in a good space, too, next summer if they can sign or trade for a talented guy," he said. "I'd rather be all the way bad than be in the middle."

Scott said he hasn't spoken to Johnson in a while but joked that he would send him a text that read, "LOL."

"I just think karma is a you-know-what, and if you try to lose games, you're not going to get the first pick," Scott said.

ESPNLosAngeles.com's Baxter Holmes and The Associated Press contributed to this report.

Kobe Responds To Magic's Comments
Kobe Bryant reacts to a recent comment made by Magic Johnson, who said he hopes the Lakers lose every game.

Magic: 'I Hope Lakers Lose Every Game'
Kevin Arnovitz and Arash Markazi discuss whether it is OK for Magic Johnson to openly talk about tanking.