Manny Machado out for season 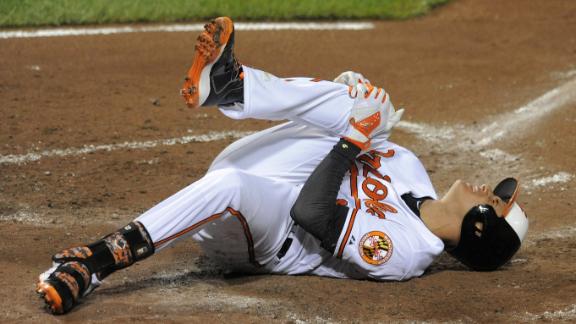 CHICAGO -- Baltimore Orioles third baseman Manny Machado, who would have been eligible to return from the disabled list on Wednesday, will instead have right knee surgery within the week and will miss the rest of the season, team vice president of baseball operations Dan Duquette confirmed Saturday.

Machado is expected to be back for spring training.

Yahoo! Sports was first to report news of the surgery Friday. The website, citing a source, says it will be performed by Dr. Neal ElAttrache, the Los Angeles Dodgers' team physician and the orthopedic surgeon who operated on Machado's left knee last season.

Yahoo! Sports also reported a small abnormality in the right knee will be fixed. The same abnormality was found in Machado's surgically repaired left knee.

"I'll probably try to bring some clarity into that situation and gather what he's being told as far as when baseball activity would start and all that stuff, I'll try to clear that up for you, probably tomorrow, give you a more definitive idea," Orioles manager Buck Showalter told Comcast SportsNet before Friday's 4-1 loss to the Chicago Cubs.

Reports of the surgery surfaced following the game.

Machado sprained his right knee while taking a swing against the Yankees on Aug. 11. He dropped in a heap in the batter's box and limped off the field, assisted by his manager and trainer.

The 2013 Gold Glove winner is hitting .278 with 12 homers and 32 RBIs in 82 games. He missed the first month of the season while recovering from surgery on his left knee.

The AL East-leading Orioles are 73-53 this season.