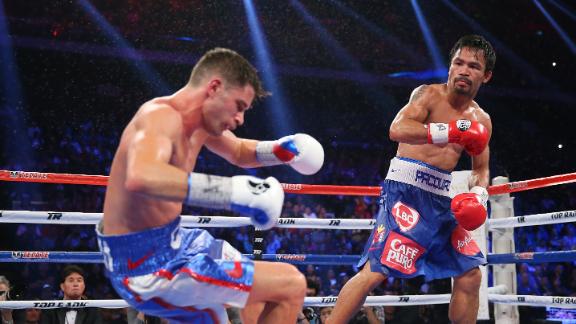 The great Manny Pacquiao did everything he could possibly do against Chris Algieri other than get a knockout in a one-sided thrashing to retain his welterweight world title.

Pacquiao, boxing's only eight-division titleholder, scored six knockdowns and dominated virtually every minute of the fight to win a lopsided unanimous decision before a sold-out crowd of 13,201 on Sunday at the Venetian Macao's Cotai Arena in Macau. Now the only question remaining in his legendary career is whether he will ever get fellow welterweight champion and pound-for-pound king Floyd Mayweather Jr. to agree to fight him after years of the biggest fight in boxing going unmade, mainly due to Mayweather's reluctance.

Coming into the fight with Algieri, there were many questioning where Pacquiao's once-devastating power had gone in recent years because, after a series of crushing knockouts as he moved up the scale, he had not scored one in eight consecutive fights since a 12th-round knockout of Miguel Cotto in November 2009 to win a welterweight title for the first time.

Make that nine in a row now, as the knockout drought continued despite Pacquiao's Hall of Fame trainer, Freddie Roach, predicting an early knockout, even saying at one point that it would be in the first round.

"Yes. I am looking for a knockout but he is fast and moving, so it's hard to get Chris," Pacquiao said.

Pacquiao's speed advantage was obvious from the opening moments of the fight. He had an easy first round, landing a good straight left hand down the middle and momentarily wobbling Algieri with a right hook.

The 35-year-old Pacquiao, the icon of the Philippines, where he is also a congressman and professional basketball player and coach, connected with a right hook in the second round that began to swell Algieri's left eye. He also landed a left hand that forced Algieri back to a corner, where he slipped on a wet spot. It was ruled a knockdown by referee Geno Rodriguez.

Pacquiao was landing almost at will. He dished out punishment in the fourth round, landing a hard uppercut, lefts to the body and lefts to the head.

Algieri landed some decent straight right hands during the fight, but they had little on them. Algieri was also warned for a low blow in the fifth round.

"The plan was to get to the later rounds without taking too much damage, step up the pace and land shots that would hurt him. If the knockout came, it came. We weren't specifically looking for the knockout, but we were looking to put some damage on the guy."

He never did, and it was Pacquiao putting damage on him. He found his power in the sixth round, knocking Algieri down twice. First, it was a left hand that had Algieri stumbling and then hitting the deck. Then, Pacquiao landed a clean right hand on the chin for the second knockdown.

Pacquiao, who made more than $20 million, scored two more knockdowns in the ninth round, one on a blistering straight left hand that sent Algieri hard to the canvas.

"I sat down on a left hook and he caught me with a great shot," said Algieri, who made a career-high $1.675 million (a big raise from his last purse, then a career-high $100,000). "That was really the only shot that hurt me. I had my legs when I got up but I knew he would come with an onslaught."

Indeed, Pacquiao did come with an onslaught, dropping Algieri again moments later after a series of punches sent him to a knee.

In the 10th round, Pacquiao notched his sixth knockdown of the fight, dropping Algieri with a right hook-straight left combination.

Despite the shellacking, Algieri's trainer, Tim Lane, was talking oddly in the corner after the round, telling Algieri they had Pacquiao where they wanted him. He should have been thinking about stopping the fight.

Despite not getting a knockout, Pacquiao said his power is still there.

"We improved our strength, we do more training, we started early in our training camp so I was very confident I would win the fight, and I'm in shape," he said.

Pacquiao landed 229 of 669 punches (34 percent), according to CompuBox punch statistics, while Algieri connected on only 108 of 469 blows (23 percent), few of which had any serious snap on them.

"I did my best. Of course, I am satisfied with my performance," said Pacquiao, who retained his title for the first time since regaining it from Timothy Bradley Jr. in April in a rematch of Bradley's hugely controversial split decision win in 2012. "I came to fight. I did my best. I think that's enough."

Algieri had come out of nowhere in June to win a controversial split decision and a 140-pound world title from Ruslan Provodnikov as he survived two first-round knockdowns and a badly swollen right eye. Provodnikov was going to be Pacquiao's opponent, but when he lost, Algieri got the call.

Knockout or not, Algieri, 30, of Huntington, New York, gave Pacquiao credit for the way he fought.

"It's not so much the punching power, to tell you the truth, it's how he mixes the punches up," said Algieri, a former kickboxer with a master's degree. "He has a very, very distinct and unique style that he has perfected. Manny Pacquiao is a hell of a fighter."

Yes, he is, but will he ever get Mayweather?

There are signs that the fight is closer to happening than at any time since the original negotiations fell apart in early 2010. Top Rank promoter Bob Arum insists there are fruitful talks behind the scenes to bring together Showtime, which has Mayweather under contract, and HBO, which has a contract with Pacquiao, for a joint pay-per-view event.

"We're tired. Everywhere we go they ask when is it going to happen? When are they going to fight," Arum said. "I say enough is enough. Just make the fight happen. Let's get it done and let's get it done the next fight for each fighter, sometime in the first six months of next year."

Although Pacquiao is on board with the fight, and the networks might very well be able to make a deal, there has been no word from Mayweather, whose reluctance to face Pacquiao has been obvious for the past couple of years.

After the win against Algieri, HBO's Max Kellerman asked Pacquiao about the fight.

"He is going to fight me? Yes! Yes!" Pacquiao joked.

All joking aside, one can only hope Mayweather will face him. There is nothing left for either of them to prove, and no other fight the public wants from either.