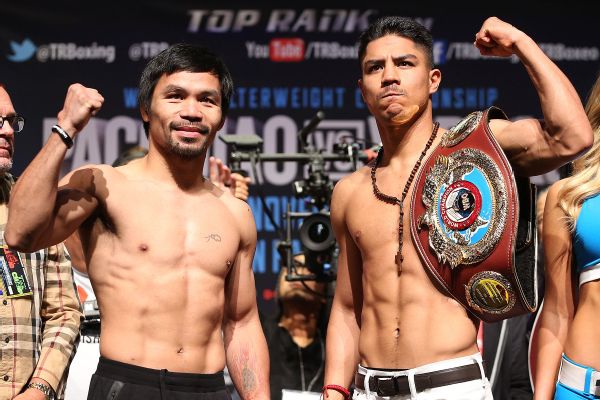 LAS VEGAS -- Boxing legend Manny Pacquiao came to the scale inside the Encore Theater at The Wynn resort on Friday and drank in the cheers of "Manny! Manny!" from his fans as he easily made weight.

Pacquiao weighed 144.8 pounds, well inside the 147-pound limit for his fight against welterweight world titleholder Jessie Vargas, whom he faces on Saturday (Top Rank PPV, 9 p.m. ET) at the Thomas & Mack Center.

Vargas also made weight for his first title defense, weighing 146.5 pounds. After they weighed in, Pacquiao and Vargas, who have shown the utmost respect toward each other during the build-up to the fight, stood side by side for interviews with various outlets.

Pacquiao will be fighting for the first time since his resounding decision win against rival Timothy Bradley Jr. in their third fight in April followed by a brief retirement, during which he was elected to the Senate in his native Philippines.

"I'm happy to be back," Pacquiao, boxing's only eight-division world titleholder, told the crowd. "I want to put on a good show and have another boxing record."

Pacquiao, 37, already the first congressman to win a world title, is aiming to be the first senator to win one, also. Pacquiao (58-6-2, 38 KOs) said he is also motivated to win back the world title he lost to Floyd Mayweather last year in boxing's richest fight. Vargas won the vacant title in March with a ninth-round knockout of then-undefeated former U.S. Olympian Sadam Ali.

"It's motivating because I am the challenger this time and I am fighting a champion," Pacquiao said. "[Winning the belt back] would mean a lot and would bring honor to my country."

Vargas (27-1, 10 KOs), 27, of Las Vegas, has been supremely confident all week and had a big smile as he walked to the scale. It remained in place when he spoke to the crowd after making weight.

"I feel great and I'm here to give the fans a great fight and come out on top and prove I'm the best in the welterweight division," Vargas said. "We've worked hard for this and I have no doubt about the outcome. Manny Pacquiao has had a great career and it would mean the world to beat him, and that is what I am ready to do. I want to become a legend."

There are three other world title fights on the card, and everybody made weight. Featherweight titleholder Oscar Valdez (20-0, 18 KOs) who will be making his first defense, weighed 125.25 as did challenger Hiroshige Osawa (30-3-4, 19 KOs) for their 126-pound fight. Junior featherweight titleholder Nonito Donaire (37-3, 24 KOs), who will be making his second defense, weighed 121.8 pounds and mandatory challenger Jessie Magdaleno (23-0, 17 KOs) was 121.25 for their 122-pound bout.

Zou Shiming (8-1, 2 KOs), the two-time Chinese Olympic gold medalist, will face Prasitsak Papoem (39-1-2, 24 KOs) for one of the flyweight world titles recently vacated by Juan Francisco Estrada. Zou was 111 pounds and Papoem was 111.5 for the bout with a 112-pound limit. The fight is a rematch of Zou's one-sided unanimous decision win in November 2014.

Also, the Nevada State Athletic Commission released the purses for the card. Pacquiao will earn no less than $4 million but could earn much more since he is on a percentage split with promoter Top Rank. Vargas will earn a career-high $2.8 million.

Valdez's purse is $200,000, Osawa will earn $50,000, Donaire will make $400,000 and Magdaleno $90,000. The official purse for Zou and Papoem is $5,000 apiece, but each will make much more from revenue in Asia, especially Zou, who likely will make in the high six figures.
Related topics:
sportsespnsenatorjessie vargaswelterweightmanny pacquiaophillipinesfloyd mayweathercongressmantimothy bradleyboxing
Copyright © 2021 ESPN Internet Ventures. All rights reserved.
More Videos
From CNN Newsource affiliates
TOP STORIES