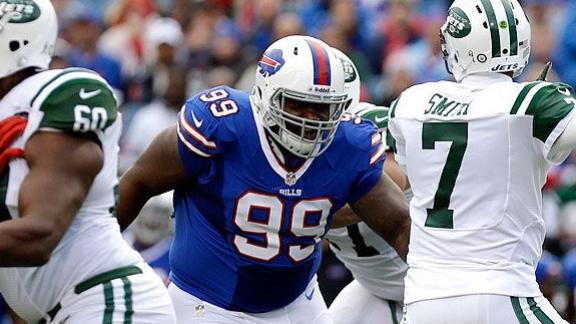 "It's not what you guys think," Dareus said Wednesday at Bills camp. "The media put things out there the wrong way."

Dareus was stopped for speeding in Alabama on May 5. He faces two felony drug possession charges, according to a statement released the next day by the Alabama State Troopers.

"You [reporters] put things out there," Dareus said. "I'm not really going to say [what is inaccurate]. I didn't really pay that much attention to it. I got a lot of text messages and things."

A court date for Dareus has not been set. His attorney, George R. Giddens, has not responded to a request for comment.

Dareus, the third overall pick in the 2011 draft, made his first Pro Bowl last season. He participated Wednesday in the Bills' first organized team activity.

"Getting on track and staying focused -- I think every time he's here and in this building, that's what we see," coach Doug Marrone said Wednesday. "I've always told Marcell that the more that he can be here, the better job that he seems to do."

In April, the Bills exercised the fifth-year option on Dareus' rookie deal, which will keep him under contract through 2015. He was arrested less than two weeks later.

Dareus said Wednesday that Bills management recently held a group meeting with him.

"They really put a lot of emphasis on [maturity]," Dareus said. "They believe in me. They know that I'm not a trouble guy. They know I'm not the type of person that's trying to look for any trouble. I'm not trying to do anything. Things happen and we're moving forward and they know I'm gonna grow into the guy they want me to be."

General manager Doug Whaley said in February that a long-term extension for Dareus was "on the radar."

"We are, obviously, disappointed with this latest development involving Marcell Dareus," Whaley said in a May 7 statement. "We will be in contact with the league regarding the situation and continue to offer support and assistance to Marcell."

The NFL could suspend Dareus under its drug policy. He also faces possible jail time if convicted on felony charges.

"It's behind me. I'm not a trouble guy," Dareus said. "I don't cause any problems nowhere. I'm not a bad guy. I don't do anything. I just have fun and be myself. Things happen, things happen."