Marcell Dareus out for OTAs 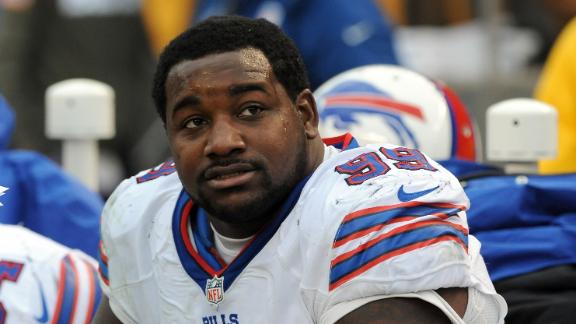 ORCHARD PARK, N.Y. -- Buffalo Bills defensive tackle Marcell Dareus was taken into custody by police in Hamburg on Friday after he was involved in a car accident stemming from an apparent drag race.

Dareus was charged with reckless endangerment in the second degree, a Class A misdemeanor, as well as reckless driving and participating in an illegal speed contest, both unclassified misdemeanors. He appeared Monday in Hamburg Town Court and was released on his own recognizance.

Bills coach Doug Marrone said he and Dareus reached a "mutual decision" for him not to participate in the remainder of organized team activities, which run through June 12. Dareus will return for mandatory minicamp the following week.

"It wasn't a disciplinary action," Marrone said. "We're in a voluntary period, so I have to be very careful of my language with the league. ... It was both of us sitting down and talking -- how do we move forward, how do we get this thing right -- working together, coming up with that decision."

Marrone declined to say where Dareus will be for the remainder of OTAs, calling it a personal situation for the Pro Bowl defensive lineman.

"Marcell has made some poor decisions lately. I've been working with him -- he's dealing with a lot of personal issues, too," Marrone said. "I spoke with him at length. We spent a lot of time together talking about a lot of things. ... I believe in Marcell and I will do everything I can to make sure that we can get him on the right track."

According to a statement released by Hamburg police, Dareus was driving a white 2012 Jaguar that was "possibly racing" with a black Camaro or Mustang around 3:16 p.m. Friday. An officer arriving on the scene found Dareus' car crashed into a tree in front of a restaurant.

Here is the tree, outside the Mongolian Buffet in Hamburg, that put a dent in Marcell Dareus' afternoon Friday. pic.twitter.com/drKnviJEXG

- Mike Rodak (@mikerodak) June 3, 2014Marrone said "to his knowledge" that Dareus was not injured in the crash.

Police are investigating the identity of the driver of the other car. The alleged drag race and crash took place less than five minutes from the Bills' practice facility and about three hours after their Friday organized team activity concluded.

Marrone said he "has knowledge" of the driver of the other car but declined to say whether it was another Bills player, citing legal reasons.

Dareus is due back in court June 17, the first day of Bills' mandatory minicamp.

He also faces charges in Cleburne County, Alabama, following a May 5 arrest. He is charged with felony possession of a controlled substance and possession of drug paraphernalia. No court date has been set for those charges.

The third overall pick in 2011, Dareus addressed his May arrest last week, saying that he isn't "a trouble guy" and "things happen."