Mark Stone has right wrist fracture after getting slashed by P.K. Subban 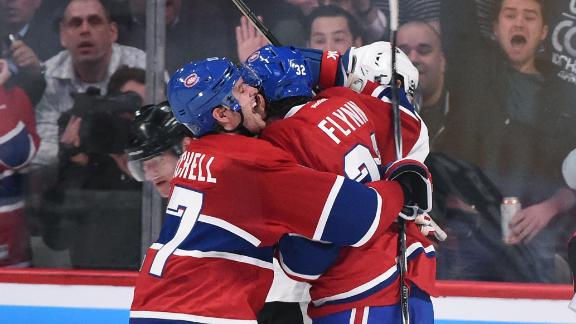 MONTREAL -- The Ottawa Senators say forward Mark Stone has suffered a microfracture of his right wrist, and his status is unknown for the rest of the Senators' first-round playoff series with Montreal.


Stone was slashed by Canadiens defenseman P.K. Subban at 8:23 of the second period of Wednesday's series opener.


Senators general manager Bryan Murray spoke with Quintal on Thursday and said he hopes Quintal will rethink his decision on Subban, which was made before the news on Stone's injury was announced.


"[Stone] came back as a courageous guy after being hurt," Murray said Thursday. "The disturbing part from our point of view is that there was a threat made before by Subban to Stone.


"There were two attempts on faceoffs to slash him, one connected. Then he two-handed him across the wrist in front of the net. [Stone] has been one of the top five players in the league the last two months of the year. It's a huge loss.


"I thought the officials made the right call on the ice, but I thought also, after knowing the extent of the injury, that something further would be considered."


Asked if Stone was ruled out of playing in Game 2 on Friday night, Murray said: "I would assume. I think the trainers have worked on him and Mark is willing to take shots or whatever it is, but he has no mobility at this point at all."


Stone fell to the ice after Subban's slash and then skated off to the dressing room.


He returned to the game roughly 10 minutes after the incident, left again early in the third period, then returned midway through the third.


"I mean, I do, yeah, of course," Stone said. "There was some intent there. That's up to the league. Obviously it was a pretty big hack. It looked like he wanted to hurt me."


The major and game misconduct to Subban fell under Rule 61.4 of the NHL rulebook dealing with match penalties.


It says: "The referee, at his discretion, may assess a match penalty if, in his judgment, the player attempted to or deliberately injured his opponent by slashing."


For his part, Subban said he was disappointed he let his teammates down by taking the penalty and getting ejected, but he denied it was premeditated.


"I didn't even look to see where I was going to slash him," Subban said Thursday. "I just kind of came down on him. I try to play hard in front of the net; obviously, it's something that I can't do, I don't want to take that penalty.


"As far as targeting anybody, I'm not out there doing that. If anything, I feel like a lot of times I'm the target, not targeting guys. It's just a tough play for me."


Canadiens coach Michel Therrien reiterated Thursday that he still thought Subban should not have been assessed a major penalty for slashing Stone, but Therrien said his team is focusing only on the next game on Friday.


While Stone is likely to miss Game 2 for the Senators, the Canadiens could get a boost to their lineup if forward Max Pacioretty is able to return.


"We'll find out tomorrow," Therrien said about Pacioretty's status. "He's having another good day, and we'll let you know tomorrow if he's ready. If he's ready tomorrow, we'll be more than happy; if not it's going to be [Game 3]."

Canadiens overcome Subban's ejection to take Game 1
Montreal's P.K. Subban was ejected in the second period after slashing Ottawa's Mark Stone, while Brian Flynn had a goal and two assists in the Canadiens' 4-3 win over the Senators.