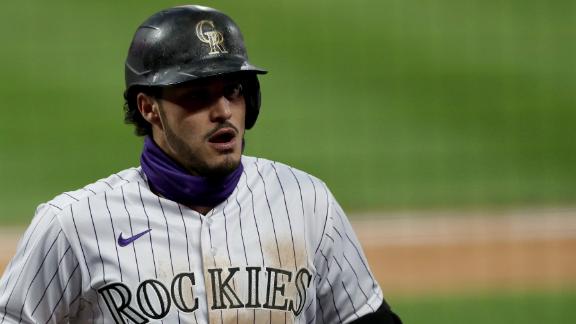 DENVER -- German Marquez struck out nine in efficiently throwing into the eighth inning and benefited from an overturned home-run call as the rolling Colorado Rockies beat the San Francisco Giants 5-2 on Tuesday night.

The Rockies moved to 8-2 for the second time in franchise history, joining a 2011 team that finished 73-89.


"There's a good vibe going on with us," said slugger Nolan Arenado, who homered for a second straight game. "The pitchers are setting the tone."

Trailing 3-0 in the fifth, the Giants thought they tied it on a three-run homer by Steven Duggar that hit off the top of the wall. A crew chief review overturned the call and awarded Duggar a two-run double. Marquez struck out Mike Yastrzemski and got Alex Dickerson to fly out to keep it a 3-2 game.

Marquez (2-1) scattered six hits over 7 1/3 innings and threw 101 pitches. This was a vastly improved outing compared to his last start against the Giants on July 15, 2019. In that game, the hard-throwing Marquez surrendered 11 runs over 2 2/3 innings during a 19-2 loss.

"I thought he was in control of the game, I really did," Rockies manager Bud Black said.

Yency Almonte got five outs, including two double plays, to pick up his first career save.

Arenado connected on a liner in the sixth that just crept over the wall. It was his 30th career homer against the Giants, the most all-time among Rockies hitter. His prodigious numbers led San Francisco manager Gabe Kapler to label Arenado a "Giant killer" before the game.

Arenado's at a loss to explain his success.

"When I first came up, it was daunting going in there. ... There's always motivation," Arenado said of facing the Giants. "I'm happy I'm doing it. Hopefully I can continue. I really don't have answers."


Same goes for the pitching, where the starters now have a combined ERA of 2.44. Marquez was just the latest to shine with his blazing fastball, sharp slider and knuckle-curve.

"He's in a different category when it comes to his stuff," Arenado said.

Marquez and Almonte kept the Giants inside the park -- barely -- to end San Francisco's streak of homering in 13 straight games at Coors Field. The string dated back to Sept. 3, 2018.

The fielding woes of the Giants continued with three more errors, including one on Tyler Heineman for catcher's interference. It brings their total to 16 this season. They've committed multiple errors in six of their 12 games.

"Hard to believe seven years in the majors this is the first time I pitched here," Gausman said. "I looked up for a second and looked at the seats where I used to sit (high seats above the bullpen). Lots of cool memories."


Rockies DH Matt Kemp drove in a run with a fielder's choice. He has at least one RBI in all five of his starts. ... OF David Dahl had a triple to open the game for Colorado. ... Giants DH Pablo Sandoval ended an 0-for-14 hitless streak with a second-inning single.

Giants: LHP Drew Smyly (sprained left index finger) will stay in San Francisco for physical therapy. He won't throw for at least a week. ... RHP Trevor Cahill (right index fingernail) is scheduled to throw a simulated game in Sacramento at the end of the week. ... The Giants are targeting a simulated game for INF Yolmer Sanchez this weekend. ... RHP Sam Coonrod (lat strain) may soon start a throwing program.

Colorado RHP Jon Gray (0-0, 2.61 ERA) searches for his first win of the season when he takes the mound Wednesday for Game 3 of the four-game series against San Francisco. The Giants named RHP Logan Webb (0-0, 2.35) as their starter late Tuesday.