Marquise Goodwin on suspension: Quit track more than year ago, so didn't give info to USADA 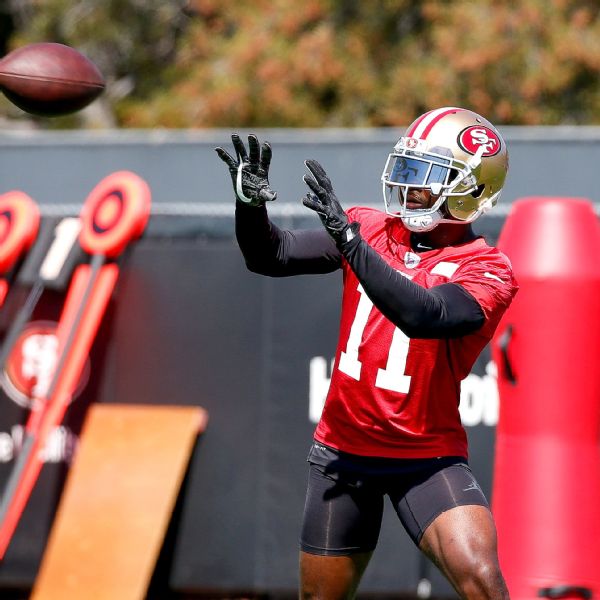 The United States Anti-Doping Agency suspended Marquise Goodwin on Tuesday for one year for failing to provide his whereabouts for drug testing, but the San Francisco 49ers wide receiver said in a statement that he is no longer competing in track and field.

USADA said in a statement that Goodwin received three whereabouts failures in a 12-month period. USADA requests the information from a select group of athletes for out-of-competition drug testing.

Goodwin, however, said in a statement provided by the 49ers that he decided to stop competing in track and field so he could focus on his football career and therefore did not supply his whereabouts information to USADA.

"Never in my life have I failed a test," he said. "I have never been opposed to testing and, in fact, have always been compliant with each and every protocol and policy associated with my competitive career in track and field. More than a year ago, I decided to cease competing in the sport in order to concentrate 100 percent on my NFL career. Therefore, I discontinued all practices associated with competing in track and field, including submitting my 'Whereabouts' information.

"It appears that because I did not inform USADA of my plans, my name was inadvertently included in their 2017 testing pool. I greatly appreciate the support of the San Francisco 49ers and the National Football League as I work to clarify this matter," he said in the statement.

The 49ers confirmed that Goodwin had given up his track and field career in order to fully concentrate on football. The team also said that the NFL will not discipline Goodwin under its policy against performance-enhancing drugs.

"Marquise informed our organization quite some time ago that he has no intentions of competing in track and field and has been entirely focused on his football career for more than a year. We have been in touch with the League office regarding this matter, and understand that Marquise will not be subject to discipline under the NFL Policy on Performance-Enhancing Substances as a result of USADA's decision," the team said in a statement.

Goodwin, 26, failed to qualify to compete at the 2016 Summer Olympics, when hefinished seventh in the men's long jump at the U.S. Olympic team trials in Eugene, Oregon, last July. He jumped 27 feet, inches, more than a foot short of Jeffrey Henderson's winning jump of 28 2 inches.

Goodwin, who was with the Buffalo Bills when he competed in the trials, signed with the 49ers as a free agent, receiving a two-year, $6 million contract with $4.45 million guaranteed.
Report a correction or typo
Related topics:
sportsespnsan francisco 49ersmarquise goodwinnfltrack and field
Copyright © 2020 ESPN Internet Ventures. All rights reserved.
More Videos
From CNN Newsource affiliates
TOP STORIES
Alameda County implements 'Social Bubbles' during shelter order
Man who trains San Jose police about bias severely injured by riot gun during protest