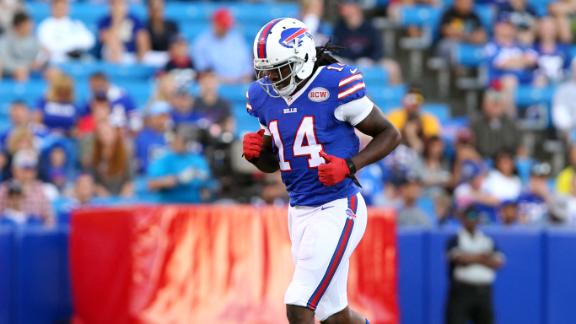 Coach Doug Marrone deferred comment on Watkins to a team spokesperson, who said he was "not aware" of any test results on Watkins' ribs.

Marrone decided to play Watkins in the finale to give the rookie more playing time with quarterback EJ Manuel, but reiterated his stance that recovery from rib injuries can be uneven.

"Once the trainers cleared him to play, I was excited about it," Marrone said. "You never know. X-rays, tests, things like that. Shows up one day, doesn't show up the next day. Could be out, could be in. Depends on the player. Could be a week, could be four to six weeks, could be longer. I'm not getting into all of that."

Watkins, who was playing for the first time since bruising his ribs Aug. 16 against the Pittsburgh Steelers, was hit by Lions linebacker Ashlee Palmer after a pass fell incomplete over the middle.

He immediately grabbed for the area under his shoulder pads as he walked back to the huddle. A few moments later, Watkins walked slowly backed to the bench, where he was examined by team doctors.He later walked to the locker room with the Bills' medical staff.

"It was a tight throw. He just probably got a little banged up," Manuel said. "He'll be fine."

Watkins, the fourth overall pick out of Clemson in May's draft, was not targeted by Manuel before leaving the game.