Marrone's plan: Look ahead, not back 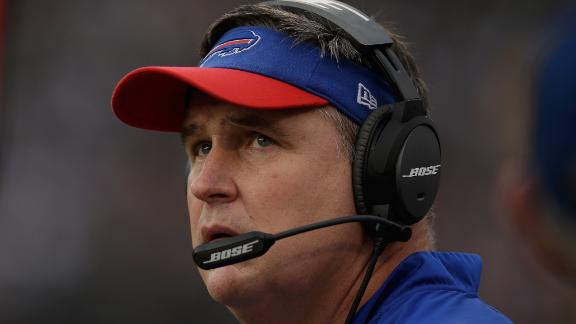 JACKSONVILLE, Fla. -- Former Buffalo Bills coach Doug Marrone said he's looking forward to the future as theJacksonville Jaguars' offensive line coach and doesn't want to dwell on his decision to walk away from his former team with two years remaining on his contract.

However, Marrone acknowledged that he was baffled at a former assistant coach's claims that he was self-centered, selfish and greedy.

Marrone did not want to go into detail about his decision to leave the Bills after two years as the head coach but said he still has a good relationship with owners Terry and Kim Pegula and feels no acrimony toward the organization.

Marrone went 15-17 in the past two seasons with the Bills before opting out of his contract in early January because of uncertainty over possible organizational changes. The clause in his contract that allowed him to do so also guaranteed his $4 million salary in 2015.

"At the end of the day, I had two outstanding years in Buffalo," Marrone said Thursday in his first public comments since leaving the Bills. "I think that Terry and Kim Pegula, they're going to be outstanding. I really can't say enough for the people within the organization, from the trainers, from the PR department, from the equipment people. They were outstanding. At the end of the day, I had a three-day window on my contract, which was obviously difficult because of the time aspect of it. My family and I made a decision to leave.

"I talked to Terry a couple of weeks ago. We had a good conversation and made the decision to [opt out], and we're not looking back and we're moving forward. Really, that's as simple as it is."

He said he left Buffalo with no guarantees of landing another head-coaching job, saying "in this profession, you can't really have that. You really don't know. It's a league where anything can happen.''

That decision, while head-scratching, also prompted some pointed criticism from his former assistants. A former assistant coach who worked with him at Syracuse and the New York Jets ripped Marrone on ESPN Radio in Syracuse.

"Self-centered, selfish, greedy," said Bob Casullo, who was Marrone's assistant coach with the Orange in 2009 and 11 games in 2010 before being fired. "You're reshuffling an egomaniac, less-than-.500 coach.

"When he takes a job, he already has his plan in place for his next job."

"The former coach was someone that I had to let go, that I've worked with twice," he said. "To say that I didn't expect something like that to happen would be naive on my part. I think that sometimes when you have to make decisions that better whatever situation you're in and you're in that role, sometimes when you have to move on from people, they look to get you back.

"I'm not like that, so I really wouldn't understand why someone would do that."

Marrone said he didn't leave the Bills with assurances that he would land another head-coaching job. In addition to the Jets, Marrone also interviewed with the Atlanta Falcons and Chicago Bears for their head coach openings, jobs that went to Todd Bowles, Dan Quinn and John Fox, respectively. Rex Ryan was named the Bills' coach.

Instead, Marrone ended up in Jacksonville, a move he said he made because he was impressed with the culture and atmosphere that coach Gus Bradley has established. Plus, he said he missed coaching offensive linemen.

"When you're going up [through the coaching hierarchy] you have the ability to help more people, meaning other assistant coaches, a bigger group of players," Marrone said. "But at the same time, what you lose is that position. And I've always thought when I was a position coach there's a bond there that's just so strong.

"You're with them every day. Now the CBA has changed, but before that, probably with them more than you are with your family and wife to a point where I can walk into a room and one of my players will go, 'Coach, you doing all right today?'"