Marshawn Lynch back to Seahawks 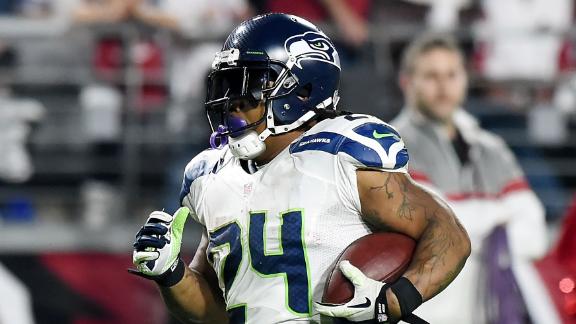 ESPN
Marshawn Lynch is returning to the Seattle Seahawks.

The star running back signed a two-year extension Friday after meeting with Seahawks officials, including team owner Paul Allen. The extension keeps him under contract with Seattle through the 2017 season, but more importantly includes a massive raise for the 2015 season, when he will make $12 million, according to agent Doug Hendrickson. Lynch was scheduled to make $7 million for the 2015 season.

Hendrickson said the deal includes an additional $24 million for the 2016 and 2017 seasons should Lynch, 28, continue his career into his 30s.

The Seahawks announced the signing Friday night, and had some fun with their star running back, who has been fined heavily for not speaking with the media in the past.

At the NFL scouting combine last month in Indianapolis, Seattle coach Pete Carroll acknowledged having made a significant offer to Lynch for 2015.

"We have been in earnest a great deal of time now negotiating to get Marshawn back with us in every way that we can," Carroll said. "It's been an ongoing, long process and we have had big offers out and we continue to work with that. We are excited about the future."

Lynch is coming off a season that ended with him not getting the ball in a goal-line situation, a play that resulted in a game-sealing interception for the New England Patriots in Super Bowl XLIX last month.

After the Super Bowl, rumors surfaced that Lynch was contemplating retirement, but both Carroll and Seahawks general manager John Schneider said at the time they didn't believe it.

Nicknamed "Beast Mode," Lynch totaled a career-high 17 touchdowns last season, including 13 rushing. He rushed for 1,306 yards in the regular season and added another 318 yards in three postseason games. Lynch had 102 yards rushing and a touchdown in the Super Bowl.

He has rushed for no fewer than 1,200 yards in each of his past four seasons with the Seahawks and has been instrumental in the franchise's appearance in consecutive Super Bowls.

While his ability and durability have made him a star, Lynch has also become known for his lack of interest in dealing with the media. In mandatory media sessions during Super Bowl week this year, Lynch often repeated the same phrase over and over again, including "I'm just here so I won't get fined," which he is attempting to trademark.

Also Friday, the Seahawks decided to terminate the contract of tight end Zach Miller, citing a failed physical. Miller, who signed with Seattle in 2011, played just three games last season after suffering an ankle injury that forced the team to place him on season-ending injured reserve.

Bruschi: Seahawks Needed Lynch
Brian Dawkins, Tedy Bruschi and Damien Woody break down RB Marshawn Lynch returning to the Seahawks and discuss why he is so important to the team.

Lynch Will Return To Seahawks Next Season
Adam Schefter reacts to the news that Seahawks RB Marshawn Lynch has decided to return to the NFL and has agreed to a new contract with the team.
Related topics:
sportsespndealbeast modecontractre signnflrunning backseattle seahawksmarshawn lynchzach millerrb
Copyright © 2020 ESPN Internet Ventures. All rights reserved.
More Videos
From CNN Newsource affiliates
TOP STORIES