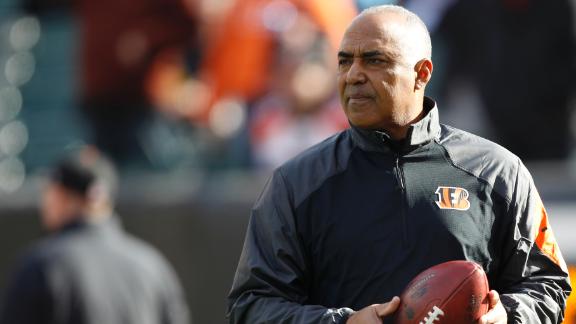 Marvin Lewis considers the possibility of facing a Johnny Manziel-led Cleveland Browns team this week as only a small concern, as the Cincinnati Bengals coach referred to the rookie quarterback as a "midget" on Monday.

With the Browns (7-6) potentially going away from incumbent starter Brian Hoyer, WLW-AM in Cincinnati on Monday asked Lewis how his first-place Bengals (8-4-1) would handle the possibility of facing Johnny Football.

"You gotta go defend the offense. You don't defend the player," Lewis said before adding, "Particularly a midget."

Lewis later apologized for his remark.

"I apologize to Johnny, the Browns and all the fans in Cleveland," Lewis said. "It was just a poor remark. I really didn't mean anything by it."

Manziel will indeed start against Lewis' Bengals as the quarterback has been told by the team he will replace Hoyer this week at the position, a source confirmed to ESPN, confirming a report by Fox Sports.

While the jab was clearly in jest when referencing Manziel, who is listed as 6-feet tall, Lewis' joke may add fuel to the intrastate rivalry between the AFC North foes when they face off Sunday at 1 p.m. in Cleveland.