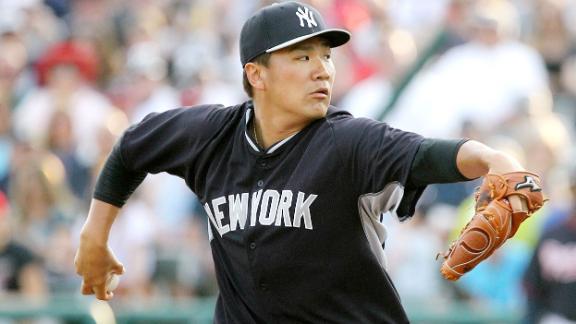 WASHINGTON -- Masahiro Tanaka acknowledged the velocity on his fastball has not been the same this spring, and he does not expect it to return this year.


Tanaka, leading up to his Opening Day start Monday against the Toronto Blue Jays at Yankee Stadium, is trying to reinvent himself as he tries to avoid Tommy John surgery on his right elbow.

"I'm going to try and establish a certain pitching style this year, so it is not the wisest to ask for velocity from me this year," Tanaka said through an interpreter on Saturday.


Tanaka plowed through the majors as a rookie sensation last year, pitching to a 1.99 ERA in his first 14 starts. But he had to miss 10 weeks with a small tear in his ulnar collatateral ligament in his right elbow. He returned to make two starts after four specialists said he could treat the injury with rehabilitation.


Last year, he averaged 91 mph, according to Fangraphs, but many times he would pump that number up when he needed to. This year, he may not have that extra gear.


"I think, in terms of miles per hour go, it will be lower than last year," Tanaka said.


When reporters pressed Tanaka if the velocity was just due to the fact he is trying to throw more of the slower two-seam fastball than four-seamers, Tanaka did not say that was the sole reason for the drop.


"I think, yes, because of the fact I'm throwing more two-seamers that could make the velocity go down a bit," Tanaka said. "As far as my pitching style and my mechanics, I'm trying to relax a little bit more when I'm throwing, so that might have to do with it a little bit."


Tanaka was very successful last year, so the change seems to be to protect his elbow.


The Yankees have outlayed a total of $175 million between Tanaka's contract and his posting fee. He finished last year at 13-5 with a 2.77 ERA, which was good enough to earn him the Opening Day assignment on Monday. It is the first time in six seasons that CC Sabathia is not starting the Yankees' opener.


"It is going to be a special environment," Tanaka said.