Masahiro Tanaka out at least 6 weeks 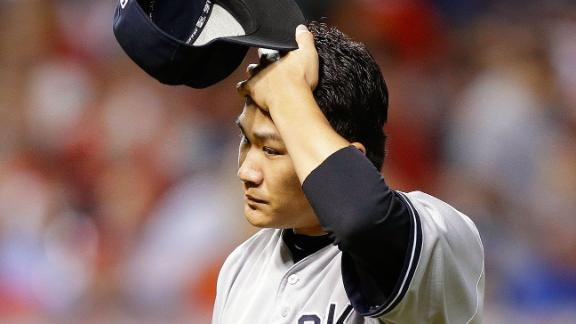 CLEVELAND -- The New York Yankees will be without ace right-hander Masahiro Tanaka for at least six weeks due to a partially torn ulnar collateral ligament in his pitching elbow, but for now have dodged the bullet of season-ending Tommy John surgery.

They also concurred on the same course of treatment -- a platelet-rich plasma injection, followed by an exercise regimen and throwing program that could get Tanaka back on the mound in six weeks.

"That's our hope," Cashman said. "The ligament tear is considered small, and we have had success with pitchers that have had these, we have actually had them continue to throw without incident and they have gotten back to their normal levels."

But Cashman cautioned: "It doesn't rule out the possibility of a Tommy John surgery in a failed attempt."

Tanaka was examined Thursday afternoon in Seattle, where all three doctors were attending an annual conference of orthopedic surgeons.

"None of them recommend surgery at this time, and they're all hopeful that in roughly, maybe a six-week period, that we will have a pitcher back if he responds positively," Cashman said.

Tanaka complained of elbow pain following a subpar performance Tuesday night, in which he blew a 3-1 lead to the Cleveland Indians, allowing home runs to Nick Swisher and Michael Brantley in a 5-3 Yankees loss.

But Tanaka had not been the same pitcher over his past four outings. Through his first 14 starts, he had a league-leading 11-1 record and 1.99 ERA and was considered a leading candidate for both the AL Rookie of the Year and Cy Young awards. But in his subsequent four starts, he was 1-3 with a 4.25 ERA, fueling speculation that the standard major-league schedule of four days' rest between starts, which is not used in Japan, might have contributed to his relative ineffectiveness.

Tanaka's partially torn UCL was revealed by an MRI taken on Wednesday in New York.

The Yankees signed Tanaka, who went 24-0 in 2013 for the Rakuten Golden Eagles of the Nippon Baseball League, to a seven-year, $155 million contract after submitting a $20 million posting fee to his Japanese team. Cashman said Tanaka had an MRI on his elbow during the bidding process, and it was shown to be healthy.

"This is a new finding and not present on the January imaging," Cashman said.

Cashman said Tanaka would return to New York to have the PRP injection -- a relatively new treatment that has been used successfully on many major leaguers, including Zack Greinke, Matt Kemp and former Yankees catcher Russell Martin -- on Monday, after which a rehab protocol will be developed.

But the GM was careful to say there was no guarantee of success with the rehab and that Tommy John surgery, with its subsequent yearlong recovery period, could still be in Tanaka's future.

"We're not here to sugarcoat anything," he said. "There's no guarantees. Every player is different. We have a tremendously gifted and tough player. We'll just see how he responds to this. It will be a success, and if it's not, we're looking at an obvious solution to it from the surgical side. Time will tell."

Even in a best-case scenario, and minus any setbacks in rehab, the Yankees will be without Tanaka until at least late August, a severe blow to their chances to remain in the AL East race. They entered Friday in third place, 3.5 games behind the division-leading Baltimore Orioles, but their 46-44 record drops to 33-40 when anyone other than Tanaka has started the game.

"We've been aggressive because now we've got four starters that we were planning to have in the rotation are out," Cashman said. "We are in the middle of a division fight and we want to stay in the fight, so we'll continue to look at any opportunities and options that present themselves to upgrade."

But Cashman also expressed personal distress at the loss of a player in which the Yankees had invested nearly as much in hope as in money.

"I'm certainly disappointed for our player," he said. "And I'm disappointed for our organization. He's an important piece. We have to continue to figure a way to plug the hole and also be hopeful and optimistic for Masahiro that he responds positively to the treatment and that we can have the player back at his normal capabilities at a future date. It's a disappointing situation and one that none of us wanted to be talking about or experiencing. But unfortunately the facts are the facts."