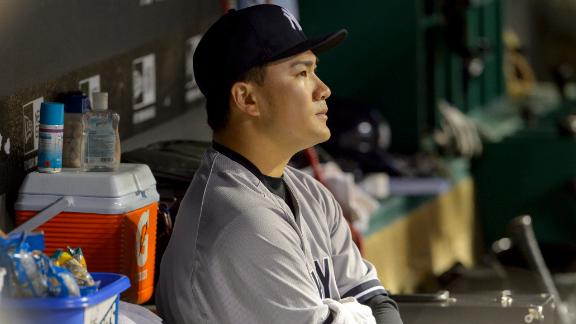 CLEVELAND -- The one real highlight of the New York Yankees' 2014 season, the chance to watch Masahiro Tanaka pitch every five days, was put on hold indefinitely Wednesday when the 25-year-old right-hander was placed on the 15-day disabled list with what the Yankees are calling elbow inflammation.

The situation might turn out to be far more serious than that -- elbow pain often is a sign of a torn ulnar collateral ligament and a precursor to Tommy John surgery -- but the Yankees declined to divulge the exact nature of Tanaka's injury because he has yet to be examined by their team physician, Dr. Christopher Ahmad.

Tanaka flew from New York to Seattle on Thursday morning to be examined by Ahmad, who was attending a conference of orthopedic surgeons. Dr. James Andrews, who is also at the conference, might also examine Tanaka, according to a baseball source.

"I think you always worry when a guy has an elbow MRI," manager Joe Girardi said. "But until Dr. Ahmad sees him, I don't have much more for you."

Tanaka, who leads the AL with 12 wins and a 2.51 ERA and is a leading candidate for the AL Rookie of the Year and Cy Young awards, may undergo further testing in Seattle, including a dye-contrast MRI, the source said.

Tanaka, who had an MRI after he was flown to New York on Wednesday, complained to team trainers about elbow soreness following a subpar performance in Tuesday night's 5-3 Yankees loss to the Indians. He uncharacteristically struggled with his control, blew a 3-1 lead, and surrendered two long home runs in the sixth and seventh innings to Nick Swisher and Michael Brantley.

"It's obviously soreness," Girardi said. "I'm not saying it's a significant injury. There's soreness, and he must have felt that it was affecting him a little bit. So we felt it was best to send him back and have an MRI."

It was the fourth loss of the season for Tanaka and his third in the past four games, a decline that coincides with his pitching for the first time this season on standard four days' rest in successive starts. The Yankees had managed to give Tanaka at least one extra day of rest every other start in deference to the practice in Japanese baseball of pitching once every seven days, a schedule Tanaka had followed for seven seasons in the Nippon Baseball League.

Girardi said he did not believe the elbow problem was the cause of Tanaka's recent struggles.
"It's the first time he's complained about it,'' Girardi said.

Tanaka's final pitch Tuesday night, his 99th of the game, was a 91 mph sinker that was lined hard for a single by Carlos Santana.

"The ball was coming out good. He was just up in the zone, so I didn't think anything of it," said Brian McCann, who caught Tanaka on Tuesday night. "The only thing from yesterday was that his pitches didn't have the sharp action they've had in the past. I didn't notice anything. It was a surprise when I [heard the news] today."

"It didn't go through my mind at all that he was hurting during the game,'' said Brett Gardner, who played left field behind Tanaka. "He was still at normal velocity and nothing stood out to me, but he obviously wasn't executing his pitches like we're used to seeing. I don't know when his arm was bothering him or how long it's been bothering him, but he obviously wasn't himself.''

Tanaka's first 14 starts were nothing short of sensational; after beating the Baltimore Orioles 3-1 on June 17, Tanaka was 11-1 with a league-leading 1.99 ERA and was averaging 10.2 strikeouts per nine innings pitched.But in the four starts since, three of which came on four days' rest, Tanaka was 1-3 with a 4.25 ERA, five home runs allowed and 22 strikeouts in 29 2/3 innings, a ratio of 6.67 per nine innings.

On Tuesday night, Girardi downplayed the effect of pitching on a standard big league schedule for Tanaka's decline.

"I don't know; it's hard to say,'' Girardi said. "It's the first time that I think he's gone a couple of starts like this on five days, so it's an adjustment."

Tanaka, who was named to the American League All-Star team in his first major league season, was scheduled to pitch Sunday in the Yankees' final game before the break. Now it is unknown when, or if, he will pitch again this year.

It is a blow to the Yankees, who already have lost three of their starting pitchers to injury -- Ivan Nova (Tommy John surgery), Michael Pineda (back muscle strain) and, most recently, CC Sabathia, who is suffering from swelling in his right knee that could require microfracture surgery. He likely is done for the season.

In their absence, the Yankees had cobbled together a rotation of two rookies (Vidal Nuno and Chase Whitley) and third-year man David Phelps, who lost out to Pineda in a spring training competition for the No. 5 starter's job, to go along with 39-year-old Hiroki Kuroda. Last week, the Yankees traded Nuno to the Arizona Diamondbacks for Brandon McCarthy, who is scheduled to start Wednesday night's game against the Indians.

But Tanaka was the glue that was holding the rotation and the team together; the Yankees were 13-4 in his first 17 starts. He had been acquired after a bidding war with a half-dozen other big league teams for his services following a 24-0 season in 2013 for the Rakuten Golden Eagles, and was signed to a seven-year, $155 million contract this winter.

"It's a loss right now, and if he's gone for any length of time, I mean, it would be a big loss,'' Girardi said. "What he's done for us, the innings and the quality of starts, it's hard to replace.''

Girardi said he was likely to use Whitley and a combination of relief pitchers to get through Sunday's game but did not know what the Yankees would do if Tanaka is out for significantly longer than 15 days.

"Let's just get through Sunday, and we're going to have to figure out what we're going to do after that,'' he said. "Pitching is fragile. I think you have to be fortunate to have five starters give you 30 starts a year in this day and age. I can't really tell you why. It's not how you draw it up, I can tell you that. But injuries are part of the game, and you've got to deal with them.''