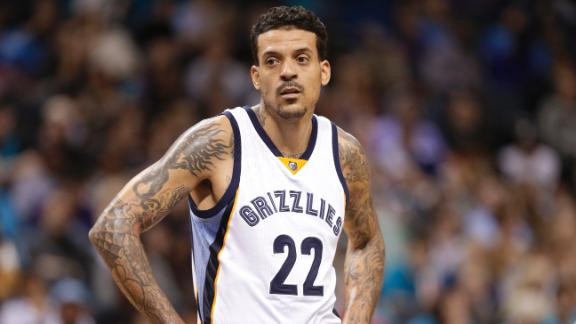 The suspension begins Tuesday when the Grizzlies face the Miami Heat. Barnes also won't be eligible to playSaturday at the Utah Jazz.

Fisher and Barnes were involved in a physical altercation in Los Angeles on Oct. 3 during a party at the home of Barnes' ex-wife. On that night, Barnes told ESPN's Ramona Shelburne that he went to Gloria Govan's home to check on his 6-year-old twin sons after receiving text messages and using FaceTime with his sons and sensing they were uncomfortable. Barnes said one of the twins told him that "Mommy's friend Derek is here."

Barnes lives about 15 minutes from his family in Redondo Beach, California. He drove to the home, where the situation between Barnes, Fisher and Govan escalated and a physical altercation reportedly took place. Police were called, though no charges were filed.

The NBA said its investigation of the incident is closed, so no punishment is expected for Fisher.

Fisher has said he discussed the incident with Knicks president Phil Jackson.

Barnes and Fisher played together with the Los Angeles Lakers from 2010 to 2012. Barnes is averaging 8.6 points and 5.0 rebounds in 25.6 minutes per game this season.

Information from ESPN's Ian Begley contributed to this report.