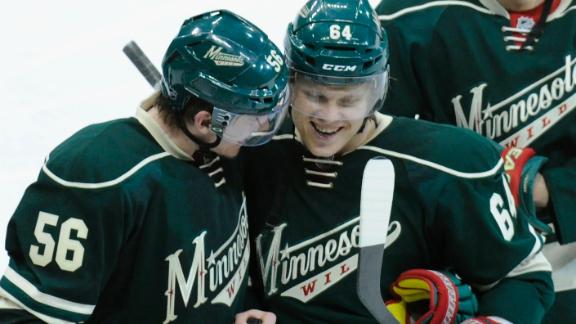 Cooke was at the league office in New York for a hearing about the incident, and his punishment was announced more than eight hours later. The Avalanche lead the Wild 2-1 with Game 4 looming Thursday, so Cooke will be out for this first-round series and more. If the term of the ban isn't finished during the playoffs, Cooke must complete it at the beginning of the next regular season.

Cooke has 48 hours to appeal the suspension to commissioner Gary Bettman. If Bettman upholds a suspension of six games or more, Cooke then has seven days to file an appeal to a neutral arbitrator. It is not yet known whether Cooke intends to appeal.

He played a key part for the Wild in Game 3 in quieting Avalanche stars Nathan MacKinnon, Paul Stastny and Gabriel Landeskog, matching up against that line often. Cooke was all over the ice Monday, colliding with almost every white Colorado jersey he could get close enough to and providing Minnesota plenty of energy in a game it had to win.

But Cooke crossed the line, the league ruled, by sticking out his knee to clip Barrie in open ice early in the second period. Barrie, who ducked to his right in an attempt to avoid the collision, tumbled over in immediate pain. He suffered a medial collateral ligament injury to his left knee and will need four to six weeks to recover.

"I think everyone is pretty informed on what he does out there and what he's done in the past, and I think that speaks for itself," Avalanche defenseman Erik Johnson said Wednesday before the punishment was levied. "There's no place for that in the game. Look at the guy who he hit: one of our top D. He's going to be out for the foreseeable future."

Added Johnson: "I don't even know if there's a place for him in this game. It's disgusting what he's done to guys' careers."

This is Cooke's sixth career suspension for various player safety violations, bringing his total of games banned to 34, including playoffs. He also has been fined four times. Four of his suspensions came between 2008 and 2011, his first three years with Pittsburgh, but since vowing to change his style, his penalty minutes have dropped sharply. This is his first banishment in more than three years, meaning he wasn't considered a repeat offender according to the collective bargaining agreement.

That didn't mean the NHL couldn't account for that past pattern, however.

In an explanatory video posted on the league website, it cited Cooke's history in determining the punishment in addition to the position of his knee, his intent to make contact, the amount of force he applied and the significance of the injury to Barrie.

Cooke began striding toward Barrie well before they collided and had the play entirely in front of him. Cooke further extended his knee after Barrie released the puck. Although the NHL acknowledged Barrie's attempt to evade contact might have worsened his injury, it said that "should have been entirely predictable to Cooke."

The Wild will replace Cooke on the third line centered by Erik Haula and flanked by Justin Fontaine with Nino Niederreiter, whose place on the fourth line will be taken by Kyle Brodziak, a healthy scratch in Game 3.

"As the year's gone on, we've lost some guys here and there and we've always had guys step up so that's been the strength of our team," Haula said after practice Wednesday in anticipation of Cooke's absence. "I don't have any doubt that it'll happen again."

Said captain Mikko Koivu of Cooke: "He's a big piece of this team. The way he plays, he gives confidence to the whole team. But we're going to support him whatever happens. Now it's a chance for somebody else to come into the lineup and do that job for us ... in a different way."

ESPN.com's Pierre LeBrun and The Associated Press contributed to this report.