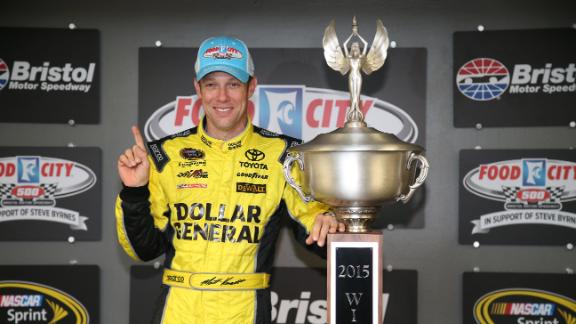 
It took him nine hours to get there Sunday at a waterlogged Bristol Motor Speedway.


Kenseth snapped a 51-race losing streak by holding off Jeff Gordon and Jimmie Johnson on one final restart in NASCAR's determined effort to stage a complete race.


Kenseth, a seven-race winner in his 2013 debut season with Joe Gibbs Racing, was winless all last year.


"It feels good to be back here. Not winning for as long as we did ... it wears on you a little bit," Kenseth said. "We had such a good 2013, and last year there were some races we had some chances to win, and just things wouldn't line up for us.


"We just couldn't get it to happen. [Bristol] was kind of the opposite. Everything worked out."


The start was delayed nearly 90 minutes because of rain, and the race was stopped three more times, including one delay that lasted almost four hours.


The final stoppage came when the race had already surpassed the scheduled 500 laps, but a quick rain shower had stalled NASCAR's attempt to race to the checkered flag following an accident with eight laps remaining. So NASCAR parked the cars on pit road and sent out its dryers to quickly try to give it one more shot.


Kenseth, the leader, was fine with NASCAR's decision because he was so confident in his Toyota.


"I've got to be honest with you, at least 90 percent of the time or more, I'd be all about, 'Man, call that thing' because anything can go wrong," he said. "I felt pretty good about where we were. I felt like unless I really, really messed it up, I was going to be clear getting into [Turn] 1. I felt like our car was good enough to hold on for two laps."


He did have a two-lap overtime sprint to the finish, and Kenseth, the pole sitter, got a terrific jump on the restart. He wasn't challenged in part because Gordon had a poor restart.


The race had a series of hiccups unrelated to the rain stoppages: Austin Dillon ran out of gas while running third because of the lengthy final caution, Denny Hamlin didn't get back in his car after the first rain break because of a kink in his neck, and the two Team Penske drivers wrecked each other just 20 laps after the start.


Carl Edwards and Kurt Busch were in contention until they wrecked following a restart eight laps from the scheduled finish, and Busch put together his strong run with an interim crew chief because Tony Gibson couldn't leave his motor home due to pain from a kidney stone.


Kyle Larson, while leading, had a miscue with a pair of cars a lap down, and the chaos it created sent Landon Cassill hard into the wall.


"Heck, that's Bristol, isn't it?" said Gordon. "I'm sure I've had wackier nights and days at Bristol than this."


Hamlin, meanwhile, said he felt something strain in his neck 12 laps into the race. The race was stopped for rain on Lap 22, and Hamlin went to his motor home to see if he could get his neck to feel better. Instead, it stiffened and he was hardly able to turn his head when NASCAR summoned drivers back to their cars.


"I can't move my head or neck like I need to, and I'm not doing this team any justice if I go out there like this," Hamlin told The Associated Press from the garage. "I have no idea what happened. I think it's just a pull, something where you jerk your head around and you feel a pain. Almost like you slept on it wrong."


Because Hamlin won last month at Martinsville, he's already earned a spot in the Chase for the Sprint Cup championship and didn't see the point in getting back into his No. 11 if he wasn't going to be competitive.


Joe Gibbs Racing turned to 18-year-old Erik Jones, one of its development drivers, to replace Hamlin. He had to fly in from North Carolina and made it to the track just five minutes before the race resumed following the first red flag.


Jones had no Sprint Cup experience but was coming off his first Xfinity Series victory last week at Texas.


"I said, 'Hey, you're not going to go unless you really feel good. You give me thumbs up,'" said Joe Gibbs. "So when they got him all in there and got him set, because we didn't have a chance to do anything, he went, 'I'm OK.' So we let him go. To see somebody that young get thrown into that situation, he handled it very good, smooth."


Persistent rain delayed the start more than an hour, and NASCAR rushed to get the event underway during a brief window.


Although it was damp and cold when the race began, there weren't any issues until the 20th lap, when Keselowski spun trying to get around a lapped car. He spun directly into Logano, and both cars were heavily damaged.


The weather ruined what Bristol officials had hoped would be a successful weekend for their spring race.


Once one of the toughest tickets to get in all of sports, Bristol boasted a streak of 55 consecutive sellouts. But attendance has been on a five-year decline for Bristol's spring race in part because of an ever-changing race date that moved the event earlier and earlier into March.


Track officials got the April race date they desired, only to have another bumpy race because of weather.