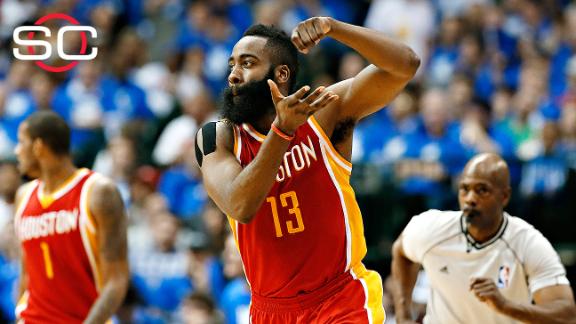 Carlisle had made pointed comments after Game 3 criticizing officials for letting the Rockets get away with what he considered to be illegal physical play.

"Look, referees miss calls, but there's just a lot of physical stuff going on out there that just doesn't look kosher to me," Carlisle said after the loss, which put the Mavs on the brink of elimination. "They're a more physical team, but this series has got to be played within the rules."

Without prompting, Carlisle specifically mentioned a long rebound by Rockets center Dwight Howard on the opening possession of the fourth quarter, a play on which Dallas guard Devin Harris ended up flat on his back by the Mavs' bench after Howard warded him off with his right arm.

"We're scrambling like hell defensively and Devin Harris is going to get the ball, and Dwight Howard throws him into our bench," said Carlisle, adding that he had reviewed the play six times on film. "He takes the ball, skips it over the top and [Trevor] Ariza gets a wide-open 3. So instead of us getting the ball and a foul on Howard, it turns into essentially a five- [or] six-point swing.

"That stuff's got to stop. The officials got to get that stuff under control, because there's too much physical stuff going on. Howard is throwing people all over the place, and that can't happen in Game 4."

After being informed of Carlisle's comments, Howard reacted by turning to teammate James Harden and mouthing, "Wow, really." Howard, who grabbed a career-playoff-high 26 rebounds in the game, then offered a politically correct response to the question.

"It's a long series, and my job is to be dominant in the paint and just do my best," Howard said. "I don't think about it when I'm out there. I just go out there and play."

Game 4 between the teams is Sunday.