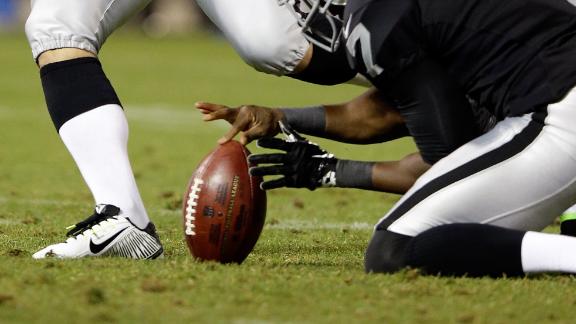 PHOENIX --The NFL's dullest play, the extra point, appears to be headed for some changes, perhaps significant ones, for the 2015 season.

While team owners didn't vote on any extra-point proposals Wednesday, there was so much discussion and interest in potential changes that the issue will be a main focal point for the next set of league meetings in May.

"There's a clear movement to wanting to change and change it this year," said Rich McKay, co-chairman of the competition committee and president of the Atlanta Falcons. McKay's committee will "develop alternatives and be ready for a potential vote" in two months in San Francisco.

Among the possibilities are moving the line of scrimmage back for PAT kicks; placing the ball on the 1-yard line for a two-point conversion; eliminating the PAT kicks entirely, requiring teams to run a play from scrimmage; and allowing the defense to score, as in college football, if the ball is turned over on a two-point try.

McKay described the discussions as "lively, with lots of ideas ... it's time to make this a football play."

"A couple coaches said they favor just lining up on the 2 and going for the two-point play," he said. "Or move the ball to the 1 for two points, or kick from the 15 for one, your choice."

The league experimented with extra-point kicks from a longer distance last preseason.

Currently, the line of scrimmage for both an extra point and two-point conversion try is the 2-yard line.

A proposal by theIndianapolis Coltsfor a bonus kick after a two-point conversion was withdrawn Tuesday.

And even though the proposal was withdrawn, which isn't surprising because the Colts didn't expect it to reach the point of getting voted on, general manager Ryan Grigson talked about why they decided to pitch the idea of giving a team an opportunity for an extra point -- a 50-yard field goal -- after converting a two-point conversion following a touchdown.

"It's a way to encourage dialogue to make sure that the extra point isn't just some ceremonial play," he said. "Even if you want to move the extra point back, if you don't do it significantly enough, you don't affect the dynamic of the play. So, I think it's got to be something [significant]. And it's for the preseason. It's not some crazy thing like we're pushing to have this in the playoffs only or something. It's something to try out."

Voted down as the meetings concluded was the Chicago Bears' proposal that each team get a possession in overtime regardless of what happens on the first series. Now, if the side receiving the OT kickoff scores a touchdown, the game ends. If it kicks a field goal, the opponent gets a possession.

Unsportsmanlike penalties handed out at the end of a half now will carry over, either to the second half or to overtime.

Lining up players with eligible numbers at ineligible positions, as the New England Patriots did against the Baltimore Ravens in the playoffs, now has more specific guidelines. Those players must line up inside the tackle box.

The owners also approved teams with retractable roofs being allowed to open them at halftime, weather permitting, and allowing linebackers to wear numbers from 40-49; previously they could wear only numbers in the 50s and 90s.

ESPN.com's Mike Wells and The Associated Press contributed to this report.