Melo: Would love to play with Kobe 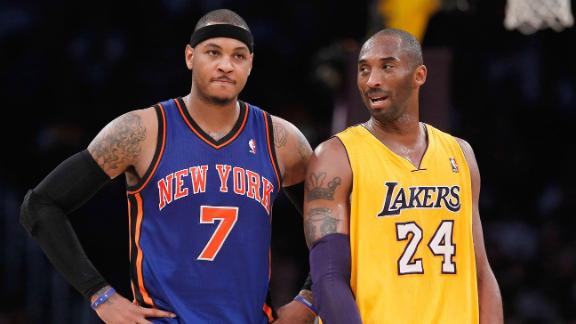 NEW YORK -- Carmelo Anthony heard "MVP" chants from the Madison Square Garden crowd as the New York Knicks held an open practice Sunday afternoon. So yes, it's good to be back in New York after a summer of free agent visits to Chicago, Dallas, Los Angeles and Houston.

Anthony ultimately chose to remain in New York and sign a five-year, $124 million contract with the Knicks. But he says that's because he "just felt more comfortable staying here in New York" and not because he had any misgivings about playing with Lakers star guard Kobe Bryant.

"Hell no. Of course not," Anthony said. "If I thought that [playing for the Lakers] was the right situation for me from an overall perspective as far as having a team there, then I would have looked at that situation more in-depth. I just felt more comfortable staying here in New York. But as far as playing with him ... I'm here now but I would always love to play with Kobe."

An ESPN The Magazine article last week quoted several agents and NBA personnel -- including Lakers insiders -- saying that L.A. has been unable to attract top talent in free agency because players don't want to work with Bryant.

Bryant was unable to attend Anthony's meeting with the Lakers in July. He had initially planned on being a part of the Lakers' pitch, but wasn't able to make it back to Los Angeles from a European vacation in time, after the meeting was moved up by several hours.

Anthony said that he and Bryant, whom he considers a good friend, had several conversations outside of the pitch meeting, but that he never felt pressured.

"He wasn't calling me every day and like, 'Get over here! I want you here!'" Anthony said. "We had conversations about different situations whether it was in New York or in L.A., but it wasn't to the point where it was non-stop calling or texting or stuff like that."

The Lakers were the only other team to offer Anthony a full maximum level contract. Due to the rules of the NBA's new collective bargaining agreement, their offer could only be for four years and $95 million -- one year and $29 million less than the Knicks signed Anthony to.

The one team that might've come closest to luring Anthony away from New York was Chicago. The Bulls put on a full-court press for the Knicks star. Despite the fact that he would have had to take considerably less money to sign with Chicago, Anthony thought long and hard about the Bulls -- likely his best situation to contend for a title this season -- before re-signing with the Knicks.

Anthony said he suspected the NBA schedule makers would have the Knicks face the Bulls once he made his decision.

"Well, I knew that was going to happen," Anthony said. "I kind of knew they were going to throw that game on the schedule first. So I was kind of prepared for that mentally and just being excited for that moment, just knowing that the offseason that I had, the whirlwind and the touring, it was a lot.

"To know that Chicago was one of the teams that I was highly considering at that point in time, and to open up against them on our home court, that is where it starts at."

Anthony said he will not wonder what could have been when he sees the Bulls with Pau Gasol and a healthy Derrick Rose on Wednesday night at Madison Square Garden.

"No, my mindset is not even there right now," Anthony said. "I am focused on building this thing in New York. I can't go out there and be kind of worried about them and saying, 'This is what I could have been.' I got to worry about my own situation here."

While he ultimately chose to stay in New York, Anthony said he does expect to hear from Bryant during the season. Anthony said earlier this month that he had reached out to Bryant and former players like Michael Jordan and Scottie Pippen about playing in the triangle offense.

"If I know Kobe the way I think I know him," Anthony said, "he is more of a person that will let me go out there and see how it works out and then throughout the season I am pretty sure he will be reaching out and say, 'OK, I see this, or I see that.' I am just trying to deal with him and get my own experience in it and if I need advice from other people and really talk to somebody, I have the right people in my phone to talk to."

Earlier this week, Knicks president Phil Jackson seemed to offer his support for Bryant, whom he coached in Los Angeles, by retweeting a comment from Red Hot Chili Peppers guitarist, Flea, that was critical of the article. Jackson added simply, "Go get 'em Flea."

Knicks coach Derek Fisher, who played with Bryant from 1996-2004 and 2007-2012, said any player who had a problem playing with Bryant "is thinking about the wrong things."

"Some guys can feel like he's not easy to work with or play with," Fisher told ESPN. "But to me, that means you're thinking about the wrong thing if that's what you're focused on. He's driving himself towards the ultimate prize of being a successful and maximizing his full potential. If that's the journey that you're on as well, you have no problems.

"He's smart enough to realize that all people are not created that way and sometimes it doesn't make for the team being as successful as it can be. He and I have always been cool because we saw it the same way. We have different personalities, different leadership styles, but that's what made us a great combination."