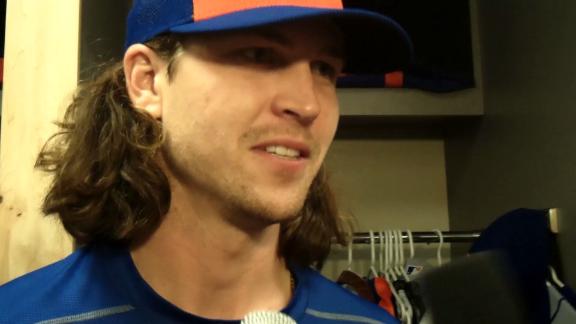 DeGrom said that 12-day-old Jaxon Anthony was suffering from apnea and would stop breathing while sleeping. After exhaustive tests -- including MRIs and X-rays and being hooked up to monitors for several days in a neonatal intensive care unit -- the newborn was free of issues for five straight days and was discharged Monday without any procedures being required. The issue more frequently arises with premature babies.

"It was definitely scary," deGrom said. "He had to be checked into the NICU, and they had to monitor him in there. But when all the tests came back and nothing was seriously wrong, we were pretty relieved. ... The doctor said they go looking for problems, but you don't really want to find any. Luckily they didn't find any, and he's doing great now."

DeGrom returns to the rotation on Sunday against the Atlanta Braves at Turner Field. It will mark his first game since his season debut on April 8, which he departed with right-lat tightness after six innings.

DeGrom threw a 71-pitch simulated game on Tuesday in Port St. Lucie, Florida, and said he had no lingering issues. He compared video from his 2016 season opener to last season's outing against the St. Louis Cardinals on May 21, when he allowed one hit and struck out 11 in eight scoreless innings. DeGrom said he noticed his front leg was stiff when he landed while facing the Philadelphia Phillies in his lone appearance this season. Last year, including against the Cardinals, there was more bend in the left knee upon landing. DeGrom suspects the stiff leg might have resulted in irritation to his right lat.

"I feel good," deGrom said. "The last few bullpen sessions have been good."

Teammates welcomed deGrom on Saturday. Even former Mets tormenter Chipper Jones, who is from the same town in Florida, popped into the visitors' clubhouse at Turner Field to check in on deGrom.

DeGrom had not been with the team since getting word that his wife, Stacey, had gone into labor April 11. For the week his son was hospitalized in Daytona Beach, deGrom would commute a few hours for throwing sessions at the Mets' complex in Port St. Lucie, Florida. DeGrom said the drives were cathartic.

"I think it was actually, at times, a little bit to get my mind off of things and get away for a little bit," deGrom said. "I think that helped me out, because it's not fun being in the hospital for a week."

DeGrom praised his sister-in-law Amanda's help. She was holding a sleeping Jaxon when the baby stopped breathing for the first time and his complexion became "dusky." She happens to be a respiratory therapist.

"She knew what to do," deGrom said. "She woke him up. And then we called the nurses in, and they looked at him. They checked all his vitals, and they were fine. And then later that evening he did it again when I was holding him. That's when we said, 'Hey, can you guys watch him for the night?' I guess he did it twice for them. That's when they decided to send him up to get monitored."

Now, though, all appears well with deGrom's son.

The family chose the name Jaxon because they liked it. The middle name, Anthony, is deGrom's middle name and the first name of deGrom's father.

On fatherhood, deGrom said: "It's been fun so far, minus that [medical scare]."

As for changing diapers, he said: "That, I'm still struggling with. That's a little tough."