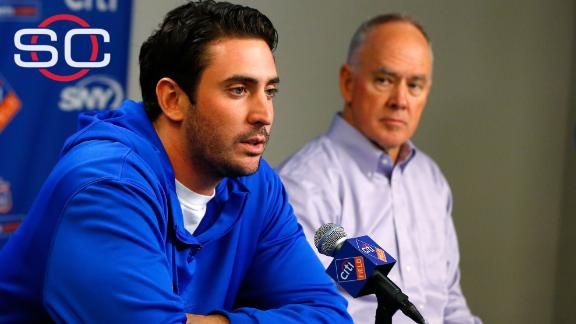 WASHINGTON -- Four days into the Matt Harvey innings-cap hullabaloo, New York Mets general manager Sandy Alderson suggested the ace right-hander might be skipped multiple times in September but offered no firm resolution on how much he will pitch.

As the division-leading Mets prepared to open a three-game showdown against the second-place Washington Nationals on Monday, Alderson indicated he had spoken with Dr. James Andrews and Harvey, and has a call into agent Scott Boras.

But Alderson said a pitching plan for Harvey had not yet been cemented among the parties.

Harvey will proceed with Tuesday's start against the Nationals. Beyond that, Alderson offered no assurances, suggesting Harvey's usage might be partly dictated by the National League East standings.

USA Today Sports reported that after Harvey makes his Tuesday start, he will skip his next start before taking one more scheduled turn. After that, Harvey won't pitch again unless needed on the final weekend of the season against the Nationals, according to the report.

The report added that if the Mets qualify for the playoffs, Harvey will not exceed one start in any potential series and could be capped at 60 pitches per playoff start.

"Any plans we have for the rest of the regular season are tentative," Alderson told ESPN.com on Monday night in response to the USA Today report. "We have not spent any time yet on a 'playoff' plan. Nothing has been discussed in that regard."

The brouhaha started Friday when Boras went public that the Mets would imperil Harvey's health if he exceeded 180 innings. Harvey currently sits at 166 innings.

Before the standoff, the Mets had planned to skip Harvey once more this season, as they did on Aug. 23 at Colorado. The Mets also planned to begin a six-man rotation to dilute all of their starters' innings counts.

Alderson said it is clear that Harvey will not make four more regular-season starts, but the GM could not define how many fewer it will be.

It is possible that Harvey does not pitch at all beyond facing the Nationals on Tuesday and during the final series of the regular season. That would raise other questions, such as how sharp Harvey would be for a critical final series start, given that type of layoff.

"We have talked about him pitching the last game -- or one of the last games -- of the season against Washington if that game is meaningful," Alderson said. "If you count that as part of the regular season, you come up with one [innings] number. If you count that as a 'playoff' game, because that's really what it is at that point, then it's a little bit different. At this point, I don't expect him to make four starts in the regular season."

Could it be as few as the two games against the Nationals?

"Well, let me get into detail after we sort of work it out among the parties," Alderson said. "I don't want to get ahead of the situation and create another disappointment."

Mets manager Terry Collins also acknowledged that the team's spot in the standings will determine its plan for Harvey.

"Right now, Matt's [starting] tomorrow. When the next one after that is, we've got different scenarios written out," Collins said. "One will give him extra rest and one he's got to come back. It depends where we stand.

"Matt and I talked yesterday at length. You can talk postseason all you want. We've got to get there. And he's going to be a big piece to get there."

Alderson said the Mets will stick with a six-man rotation in September because innings need to be conserved for other pitchers, including rookie Noah Syndergaard. Right-hander Logan Verrett should get spot starts for Harvey down the stretch.

Regardless of which plan is implemented, Alderson cannot assure Harvey will pitch a full complement of postseason games.

"How he's used in the postseason is really going to be a function of how he's gotten through six months of the regular season," Alderson said. "I can't sit here and say he's going to be available through the entire playoffs, because we don't know how he will feel and what all of the considerations are at that time. That's the position we've always had. When we get there, we'll figure it out.

"Matt has always said he wants to pitch in the playoffs. I absolutely believe that he has meant that every time he has said that. At the same time, we have said we want him available in the playoffs. But how exactly that gets executed, I think, is a function of the circumstances as we get closer, assuming that it's even a possibility to get there."

Alderson did all but rule out using Harvey in the bullpen to conserve innings, despite the Mets' need for another power arm in the late innings. Alderson noted that Harvey had not done that before, and the different responsibilities would carry risk.

"I'd never say never, but my personal belief -- without having discussed it with the doctors at this point -- is putting him in the bullpen would be possibly a worse situation than continuing to pitch him in the rotation, just because he's never done it," Alderson said. "It's an unknown."

Asked if he was upset so much oxygen had been consumed by Harvey innings talk leading into a critical series against the Nationals, Alderson said: "Things happen. Things come up that have to be dealt with. Hopefully this will resolve shortly and be put behind us."

Collins said he did not believe the issue would be divisive in the clubhouse. He noted that captain David Wright spent four innings during Sunday's game in Miami speaking with Harvey in the dugout about what has transpired.