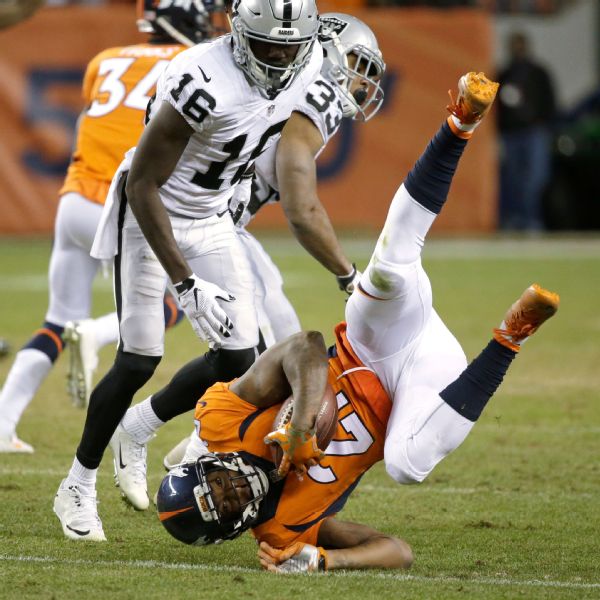 DENVER -- An angry Michael Crabtree said he chose not to retaliate against Aqib Talib after the Denver Broncos cornerback ripped his gold chain off following a play, with the receiver saying he made a "business decision" not to hurt the Oakland Raiders.

"Acting," Crabtree said. "You aren't defending anybody up like that.

"You hard? You tough? You snatch a chain in front of the police and run off? Childish, man."

The confrontation occurred after a deep incompletion down the right sideline in the first quarter of the Raiders' eventual 24-6 loss. Talib gave Crabtree a little shove after the play, and the Oakland wideout returned the favor as he stood up. Talib then ripped the chain off -- in front of an official.

Crabtree also had issues with the referees, saying they were "one-sided" and that they treated him like a "criminal" during the game.

"Disrespectful," Crabtree said of their treatment of him. "They were acting like I was the problem. That's what I didn't like. I'm not even that type of dude. I play football ... I could have cut [blocked] him; I could have hurt him. But I don't like that."

It wasn't all bad for Crabtree on the day; he went over 1,000 yards receiving for the second time in his eight-year career. Fellow wideoutAmari Cooperalso had a 1,000-yard year, making them the first Raiders teammates to do that since 2001 (Tim Brown, Jerry Rice).