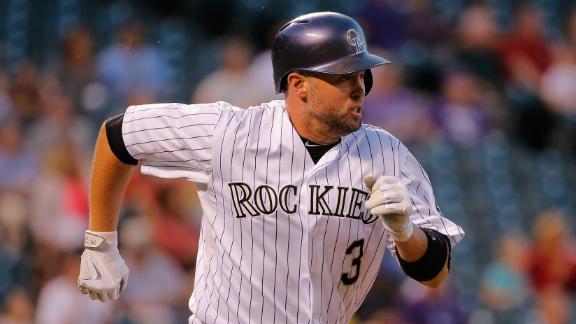 "I don't think it's any secret that we're looking to improve offensively, and there's not a lot of options out there on the free-agent market or even in the trade market," Mets assistant GM John Ricco said. "Based on what we've learned, at least to this point, it's going to be pretty pricey.

"We thought this was a way to clearly upgrade our team and our lineup. ... [General manager] Sandy [Alderson] has talked about we're looking to turn the corner here and start to compete in 2015. I think this is a message that we're going to be aggressive. Right out of the box we had a guy we liked, and we went and got him."

The Mets have been wary of forfeiting draft picks in recent years, but will surrender the 15th overall pick for landing Cuddyer.

"We've talked a lot about not giving up picks," Ricco said. "In this case, we looked at it, did the analysis and decided that this player was worth it."

Cuddyer hit .332 with 10 home runs and 31 RBIs for the Rockies in 2014. He was limited to 49 games, with three trips to the disabled list because of hamstring and shoulder injuries.

"He took a physical today. We've looked at all the injuries and there was nothing there that were too concerned about," Ricco said. "And the age is the age. Certainly there's risk associated with any signing. And we believe in the player and think he's going to be a real good fit for us."

Cuddyer should join Curtis Granderson and Gold Glove center fielder Juan Lagares as the primary outfielders. Because Cuddyer has manned right field during his career, it appears likely Granderson will shift to left field in 2015. Granderson said last week he would be willing to shift if the Mets asked.

"I am flexible," Granderson said. "Even with Detroit, I remember when Cameron Maybin came up and made his debut at Yankee Stadium, I said, 'Hey, I've played left field. He hasn't. If you need me to move, I will. That's always been something that's been a part of my career. I've got the ability to move around. Just let me know.' "

The right-handed-hitting Cuddyer also has logged significant time at first base. The Mets hope Lucas Duda, who slugged 30 homers this past season, can emerge as a full-time player at that position. However, if Duda continues to struggle against left-handed pitching, it is conceivable Cuddyer could see action at first base as well. Duda hit .180 with two homers in 111 at-bats against southpaws in 2014.

Cuddyer is a childhood friend of Mets captain David Wright. Both grew up inNorfolk, Virginia.

Essentially, Cuddyer accepted $5.7 million more from the Mets for two years than he would have earned with the Rockies for one year. Ricco said he could not speculate on Cuddyer's motivation, but acknowledged the Mets being on the brink of contention and Cuddyer's friendship with Wright as likely factors in the decision.

"I actually wasn't surprised that they offered," Ricco said about the Rockies' $15.3 million bid to retain Cuddyer. "And it certainly factored in the decision. But we decided to go forward and sign him."

Asked about statistics at Coors Field being inflated, Ricco said: "This is a guy who is a professional hitter. He's got a track record. Obviously Minnesota was a hitters' park, but he's hit all over baseball. He's been in both leagues and had success everywhere."

With the starting outfield seemingly addressed, the Mets likely will focus their attention on the middle infield. Sources have told ESPNNewYork.com that incumbent second baseman Daniel Murphy, who is eligible for free agency after the 2015 season, is available via trade. Moving him would allow the Mets to use Wilmer Flores at second base.

The Mets also are in the market for an upgrade at shortstop. Trade options reportedly include Troy Tulowitzki of the Rockies andAlexei Ramirezof the Chicago White Sox.