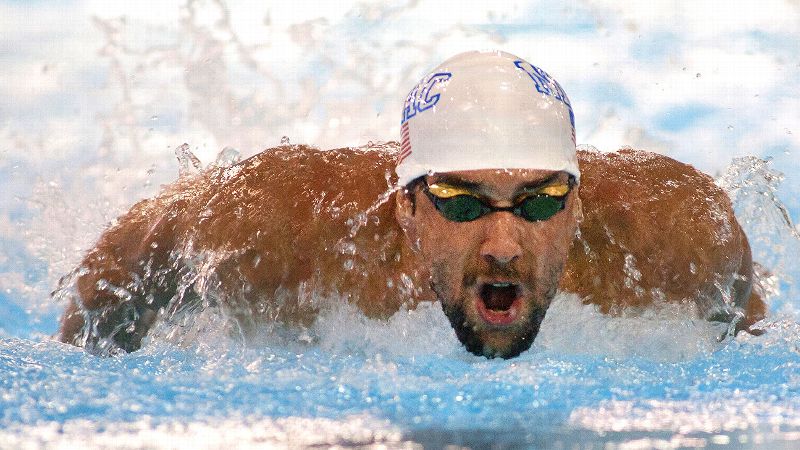 CHARLOTTE, N.C. -- Michael Phelps lunged to the wall, popped his head out of the water, and turned immediately toward the scoreboard.

For the first time since his supposed farewell at the 2012 London Olympics, Phelps was on top of the podium Friday night. He cruised to victory in the 100-meter butterfly at the Charlotte Grand Prix, while longtime rival Ryan Lochte watched from the VIP area, a brace on his injured left knee.

Phelps made it through a grueling double in the morning prelims, also swimming the 200 freestyle, then limited himself to one race in the evening. While he didn't improve on the time from the first meet in his comeback, when he finished second to Lochte at Mesa, Arizona, last month, it was another big step toward competing at the 2016 Rio Olympics.

If nothing else, Phelps showed he still knows how to get to the wall first.

"It's been a while," he said. "It's nice seeing the first place next to your name. It's good to be on that side of it again. That's my first one since I came back. Hopefully, we can get a string of those."

Going out strong and remaining comfortably ahead on the return leg, Phelps cruised to victory in 52.13 seconds, about a half body-length ahead of runner-up Pavel Sankovich, a 2012 Olympian from Belarus.

Phelps matched his time exactly from Arizona, where he returned to competition for the first time since retiring after the London Olympics. But this time, he had the pool to himself. Lochte pushed a little too hard in Mesa, aggravated his surgically repaired knee, and was advised by his doctors to give it some rest.

The overflowing crowd at the Mecklenburg County Aquatic Center would've preferred another Phelps-Lochte showdown, especially since Lochte now trains in Charlotte, but they seemed more than satisfied to get the most decorated athlete in Olympic history.

"I took a couple of selfies this morning that the kids were pretty excited about," Phelps said. "Even the moms were getting excited about taking selfies."

Lochte was disappointed to miss a chance to swim in front of his new home fans for the first time.

Assuming Lochte gets healthy, they'll have plenty of chances to race this summer. There are two important meets coming up in August: the national championships in Southern California and the Pan Pacific Championships in Australia, which will determine the team for the 2015 world championships in Russia.

"It's always good to have someone like that to race," Phelps said. "As much as I say I don't pay attention to anybody else, he and I hate to lose to each other. It's very good to get in a race with him. We do tend to really push each other to the max."

Phelps took a break after the Arizona meet to attend a golf outing in Mexico for his charitable foundation. He did get in some light training, but conceded that the layoff hurt his fitness a bit. Also, he didn't bother shaving down for the Charlotte meet, sporting a beard to make it a little tougher on himself.

"Obviously I want to improve every time I get in the water," Phelps said. "I would've liked to have been a little faster than I was in Mesa. But being able to go the exact same time while missing a couple of days and having a three-week beard on my face, it's respectable, I'll say that. My body is a little sore right now."

He's about to hurt even more. Phelps will head to a month of high-altitude training in Colorado next week, looking to improve his endurance, and he plans to swim a more extensive program at the final Grand Prix meet of the season at Santa Clara, California, in late June. He'll likely stick with the 100 fly, perhaps try another 200 free and maybe bring back another of his signature events, the 200 individual medley.

"Santa Clara will be my first full meet," Phelps said. "We'll have a better idea of what my body can handle, swimming multiple events and swimming every day. That's something we're looking forward to."

There's still plenty of room for improvement. He struggled to judge the distance to the walls in Charlotte, probably costing him at least a few tenths in the 100 fly. Also, his form might look fine to the naked eye but it didn't feel quite right to Phelps.

"The timing of my hips and my stroke was off," he said. "That's something I have to work on."

He headed home after swimming only one day in Charlotte, content that he had accomplished the next goal in his comeback.

"It felt better than Mesa. It felt more relaxed than Mesa," he said. "It was nice getting a double under my belt."