Michael Sam gets chance with Dallas 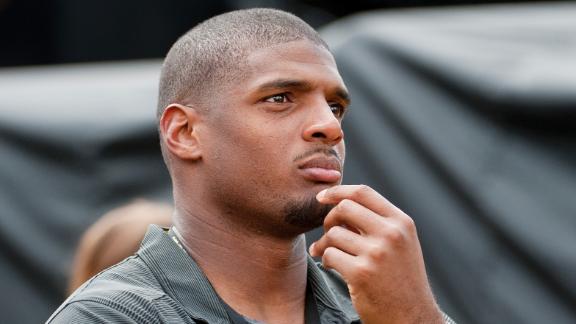 IRVING, Texas -- When Michael Sam was released last weekend by the St. Louis Rams, he was sure another opportunity, if not with the Rams, would come.

When his phone didn't ring over the weekend, there was some surprise a dominant college pass-rusher couldn't get a bite with another NFL team. It all changed Wednesday morning when Sam passed a physical and joined the Dallas Cowboys' 10-man practice squad.

"It was a little longer than I expected," said Sam, who is trying to become the first openly gay player to participate in an NFL regular-season game. "But you know what, I'm here now, and that's all that matters."

The Cowboys downplayed Sam's arrival, saying the objective is to play against the San Francisco 49ers in the season opener Sunday afternoon at AT&T Stadium.

Sam, however, became the first practice squad player to hold a news conference. Standing against a wall with the Cowboys' blue star on it, Sam was surrounded by reporters.

"It feels good to be a Cowboy," said Sam, a Texas native. "It feels great."

Sam appeared tired with the constant questions about fitting in and trying to prove himself worthy of a roster spot.

Sam has been described as a tweener, and some have said he's not fast enough to play defensive end. He seemed to be dismissive of that kind of question Wednesday.

"Did you not watch my preseason?" Sam said. "Did it look like I was slow?"

Sam has yet to meet Cowboys owner/general manager Jerry Jones, who was in Austin, Texas, for a promotional event, but he did speak with executive vice president Stephen Jones.

"This is Jerry's team and he wants everything right and I'm here to do everything I can to earn a spot on this team," Sam said.

Coach Jason Garrett said he hasn't had any special conversations with players or staff members regarding Sam's arrival. Garrett, along with several players, has downplayed the fact that Sam is an openly gay player.

Linebacker Justin Durant gave a reporter a funny look when asked whether Garrett addressed the team about Sam.

"No, none of that," Durant said. "He's just going to come in and help the team, that's it, it's just football."

Quarterback Tony Romo said the team is following the lead of Garrett, who wants the focus on football.

"[Sam] just got here today," Romo said. "I haven't seen much other than on scout team and some of the special teams stuff. For us as football players, it's all about, there are 53 guys, there are 10 guys on the practice squad, consistently, everyone has different politics, religion, views on things, and I think what you find in the locker room, no one cares. It's about can you help this football team win. We're always bringing in people to help the football team. If he can help us, it's a bonus and we'll be lucky to have him. It's just part of the whole process."

Sam will learn how to play within the Cowboys' 4-3 scheme and contribute on special teams. There are no guarantees Sam will be called up to the active roster, but given how the Cowboys' pass rush struggled in the preseason, there's a good chance he might get called up.

"Like I said, any way I can use my speed or the things I learned in St. Louis, anything I can do to help this team win games," Sam said. "I'm hungry to be on the team and help a team win, and I'm sure that Dallas wants to win as well."

Dallas heads into the opener with serious questions about its defensive line after giving up the most yards in the NFL last season -- and third-most in league history.

Defensive end George Selvie, who might miss the opener with a shoulder injury, is the only Cowboys lineman who had more than two sacks last season.

Tackle Terrell McClain, one of the team's key free-agent signings, is likely out with a sprained ankle. The other major free-agent pickup, tackle Henry Melton, missed all the preseason games with a groin injury and hasn't played since tearing a knee ligament with Chicago in Week 3 last season.

Rookie DeMarcus Lawrence, who was drafted in the second round with the hope that he could at least partially fill the void created by the departure of DeMarcus Ware, can't play until after the eighth game. He's on short-term injured reserve with a broken right foot.

The Cowboys had five sacks in the preseason, and the two players who led the team in the preseason, Martez Wilson and Zach Minter, did not make the final roster. The Cowboys acquired Lavar Edwards in a trade with the Tennessee Titans and signed free agent Jack Crawford, who was among the final cuts by the Oakland Raiders. Neither player has a regular-season sack to his credit.