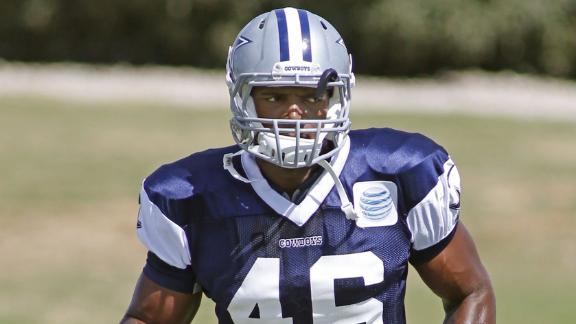 Sam, the first openly gay player to be drafted by an NFL team, signed with the Cowboys on Sept. 3 after he was among the final cuts of the St. Louis Rams.

He took to Twitter on Tuesday to express his gratitude for the opportunity.

"Comes to work every day and practices hard," Garrett said last week. "One of 10 practice roster guys that we have, so he's working on his skills, trying to develop, but also doing a lot of other things. Playing offense, defense, playing the kicking game, that's what a lot of those guys do."

The Cowboys (6-1) have just seven sacks this season, but they never seriously considered calling up Sam to the active roster. With rookie defensive end DeMarcus Lawrence eligible to play Nov. 2 against the Arizona Cardinals, the Cowboys are hoping he can spark the pass rush.

When the Cowboys signed Sam, the team broke from the norm for a practice squad player and held an interview session outside the locker room because of the large corps of media on hand.

"It feels good to be a Cowboy," Sam said that day.

He did not answer questions after that day, slipping into the background like most practice squad players do. He made $6,300 per week.

Davis spent time the last two seasons with the New York Jets before he was released in August.