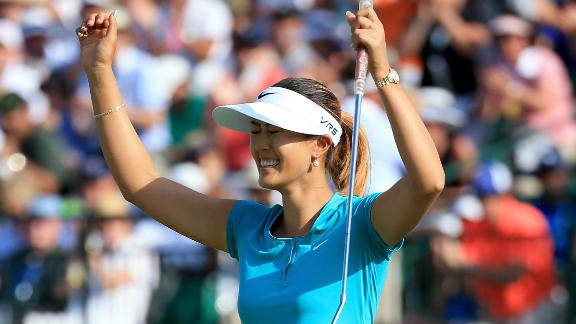 PINEHURST, N.C. -- The road Michelle Wie took to a U.S. Women's Open title was unlike any other, and suddenly insignificant. Whether this was a long time coming was the least of her cares.

The biggest star in women's golf had her name on the biggest trophy.

"Oh my God, I can't even think straight," Wie said Sunday after a two-shot victory over Stacy Lewis to claim her first major.

Wie took to Twitter to show off her new hardware.

All buckled in!!!!! #safetyfirst @Kia pic.twitter.com/H8rLRaKJ5H

- Michelle Wie (@themichellewie) June 22, 2014The final three holes at Pinehurst No. 2 were filled with ups and downs that Wie knows as well as anyone in golf. She responded with a performance worthy of the hype that had been heaped on her since she was a teenager.

With a three-shot lead on the 16th hole, Wie nearly threw it all away with one poor decision, only keeping the lead by making a nervy 5-foot putt for double bogey. And right when it looked as though this would end badly, the 24-year-old from Hawaii responded with the putt of her life that made her a Women's Open champion.

Facing a 25-foot birdie putt on 17 that was fast and dangerous, Wie pumped her fist when it fell, then pounded her fist twice to celebrate the moment.

"That kind of emotion, that kind of pressure ... I'll think of that putt as one of the best putts I've ever hit in my life," she said.

Lewis was on the range preparing for a playoff when her caddie told her Wie made birdie on the 17th. Moments later, Lewis was on the 18th green to hug Wie. Like most players, she was perplexed why Wie would spend so much time trying to compete against the men when she still didn't have an LPGA Tour card.

They are friends now and practice frequently. Lewis said she wasn't the least bit surprised that Wie delivered such a clutch moment.

"I think that scene on 18, being on network TV, as many people as we had around there at Pinehurst No. 2 and Michelle Wie winning the golf tournament, I don't think you can script it any better," Lewis said. "I think it's great for the game of golf. I think it's even better for women's golf. I'm so happy for Michelle Wie. I mean, this has been such a long time coming for her."

Wie had chance to win this title when she was a 15-year-old amateur at Cherry Hills, and a 16-year-old pro at Newport. The last time she was in this area, she opened with an 82 at Pine Needles in 2007 and walked off the course the next day because of injuries.

She has been one of the biggest stars in women's golf since she was 13 and played in the final group of a major. Her popularity soared along with criticism when she competed against the men on the PGA Tour while still in high school and talked about wanting to play in the Masters.

The 6-foot Wie is all grown up. She is a Stanford graduate, popular among pros of both genders, and now a major champion.

"I can't believe this is happening," Wie said.

Just like so much of her life, the path included a sharp twist no one saw coming.

Wie started the final round tied with Amy Yang, took the lead when Yang made double bogey on No. 2 and didn't let anyone catch her the rest of the day.

In trouble on the tough fourth hole, she got up-and-down from 135 yards with an 8-iron into 3 feet. Right when Lewis was making a big run, Wie answered by ripping a drive on the shortened par-5 10th and hitting a cut 8-iron into 10 feet for eagle and a four-shot lead.

She had not made a bogey since the first hole -- and then it all nearly unraveled.

From a fairway bunker on the 16th, holding a three-shot lead, she stayed aggressive and hit hybrid from the sand.

"I was kind of a dummy for not laying up when I was in that situation," she said. "And it kind of bit me in the butt. But I laughed it off. Stuff like that does happen."

The only time panic began to set in was when no one could find her ball. It finally was located after a three-minute search, buried in a wiregrass bush. She quickly and wisely took a penalty drop behind her in the fairway to limit the damage, chipped to about 35 feet and ran that putt some 5 feet by the hole.

Miss it and she would be tied.

Bent over in that table-top putting stance, she poured it in to avoid her first three-putt of the week. Smiling as she left the green, she hit 8-iron to 25 feet and delivered a putt that will surely rank among the highlights in U.S. Women's Open history.

Wie finished at 2-under 278, the only player to beat par in the second week of championship golf at Pinehurst. Martin Kaymer won by eight shots last week at 9-under 271, the second-lowest score in U.S. Open history.

Juli Inkster, playing her 35th and final U.S. Women's Open, closed with a 75 to tie for 15th. She received the loudest ovation of the week walking up the 18th, until Wie arrived as the winner.

"I think that without your downs, without the hardship, I don't think you appreciate the ups and much as you do," Wie said, the gleaming trophy at her side. "I think the fact that I struggled so much, the fact that I kind of went through a hard period of my life, the fact that this trophy is right next to me, it means so much more to me than it ever would have when I was 15.