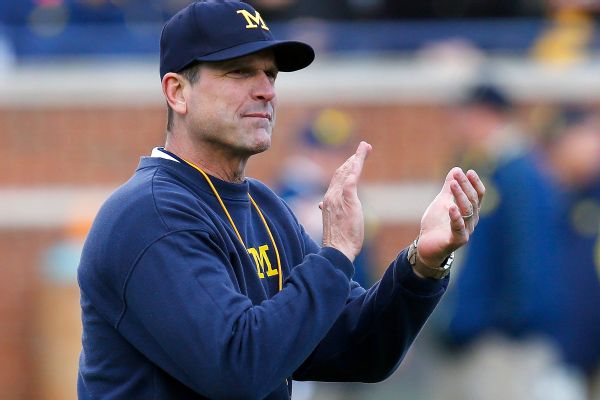 ANN ARBOR, Mich. -- Michigan is committed to paying Jim Harbaugh's top three football assistants $1 million each per year. In doing so, it becomes the first public institution, of those that are required to make contracts available via Freedom of Information Act request, to pay three assistant coaches at least $1 million each.

Defensive coordinator Don Brown and offensive coordinator Tim Drevno have been retained with contracts worth more than $10 million combined over the next five years. Passing coordinator Pep Hamilton was lured away from the Cleveland Browns with a $4.25 million, four-year deal.

Terms of their deals were obtained Tuesday by The Associated Press with an FOIA request.

Michigan athletic director Warde Manuel extended the offers to Brown and Drevno in December, before the Wolverines lost to Florida State in the Orange Bowl. On Jan. 9, Manuel extended an offer to Hamilton in writing.

Harbaugh added Hamilton, who was an associate head coach for the Browns last season, after Jedd Fisch left to be UCLA's offensive coordinator. Hamilton's salary will be $1 million in the first three years of his deal before he gets a bump to $1.25 million in 2020. He's getting a $150,000 signing bonus and is eligible for retention bonuses of $450,000 in April 2018 and $250,000 the following year.

Drevno has been on Harbaugh's staff in each of his two seasons at Michigan. Brown was hired last year.