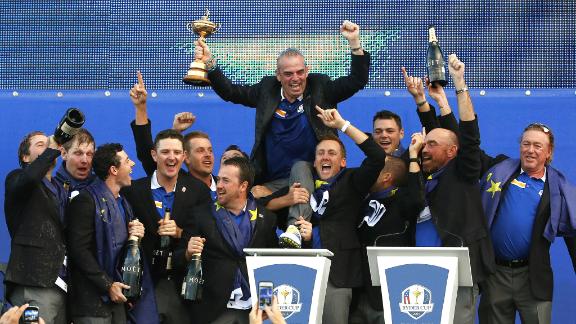 GLENEAGLES, Scotland -- In a brutally honest yet awkward post-Ryder Cup news conference, Phil Mickelson criticized captain Tom Watson's approach to the matches and wondered why the formula used in the United States' last victory has been abandoned.

With Watson sitting just a few seats down from him following the Americans' 16-11 defeat to Europe on Sunday at Gleneagles, Mickelson suggested that Paul Azinger's method used in the last U.S. victory in 2008 would have been a better approach.

Azinger used a pod system in which he put his 12 players into three groups of four prior to the event and kept them together through practice rounds and into the matches.

By implication, Mickelson was also suggesting that 2010 captain Corey Pavin and 2012 captain Davis Love III also erred. The U.S. lost both of those Ryder Cups by a score of 14-13.

"Unfortunately, we have strayed from a winning formula in 2008 for the last three Ryder Cups, and we need to consider maybe getting back to that formula that helped us play our best," Mickelson said.

Playing in his 10th Ryder Cup, Mickelson won his singles match Sunday 3 and 1 over Scotland's Stephen Gallacher but saw the U.S. team fall to 2-10 over his Ryder Cup career dating to 1995.

Watson, 65, the last captain to win in Europe back in 1993, didn't play Mickelson on Saturday, a first in Mickelson's Ryder Cup career.

Asked if Mickelson was being disloyal for expressing his views so strongly, Watson said, "Not at all. He has a difference of opinion. That's OK. My management philosophy is different than his."

Earlier, Mickelson would not answer a question about being kept on the bench Saturday but it was clear the decision took him by surprise. As it turned out, Mickelson finished 2-1 but Watson decided not play him with partner Keegan Bradley on Saturday due to their Friday afternoon loss.

As is Ryder Cup tradition, all 12 players and the captain were at a podium for a news conference afterward.

The 10th question went to Mickelson and he was asked what worked in 2008, a 16-11 victory for the U.S. and the only American win since 1999. Mickelson ran with the question.

"There were two things that allowed us to play our best, I think, that Paul Azinger did, and one was he got everybody invested in the process," he said.

"He got everybody invested in who they were going to play with, who the picks were going to be, who was going to be in their pod, who -- when they would play, and they had a great leader for each pod.

"Those two things helped us bring out our best golf. And I think that we all do the best that we can and we're all trying our hardest, and I'm just looking back at what gave us the most success. Because we use that same process in the Presidents Cup and we do really well."

Asked if any of that happened this week, Mickelson said: "Uh, no. No, nobody here was in [on] any decision."

Watson, when asked about Azinger's captaincy, put the loss on the players.

"I had a different philosophy as far as being a captain of this team," he said. "It takes 12 players to win. It's not pods. It's 12 players. And I felt -- yes, I did talk to the players, but my vice captains [Andy North, Steve Stricker and Floyd] were very instrumental in making decisions as to whom to pair with. I had a different philosophy than Paul. I decided not to go that way."

Mickelson was asked about being a future captain, since he had the strategy for winning.

"Oh, no, no -- I've been on eight losing teams," he said. "I'm only reflecting on the one time in the last 15 years that we've won and what allowed us to do that, make no mistake."

As for his own possibility of being a captain in the future, Mickelson, who has won five major championships and is in the Hall of Fame, said his goal is to keep making the team.

"I intend to do my best of making the Hazeltine team [in 2016]," he said. "Again, for 20 years, not requiring a pick, I'm going to make that team on my own and I'm going to play my heart out to win only my third Ryder Cup victory and to make my record an astounding 18 percent or whatever."

In the aftermath of another U.S. defeat, several American players not taking part in the Ryder Cup took to Twitter to endorse a return captaincy for Azinger in 2016 at Hazeltine in Minnesota, including Jason Dufner -- who played on the team that lost at Medinah in 2012 -- and Billy Horschel, who recently won the FedEx Cup.