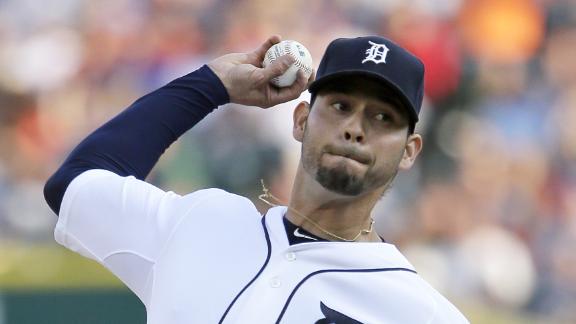 DETROIT -- The Tigers expect two-time AL MVP Miguel Cabrera to go on the disabled list for the first time in his career.

The first baseman left Friday night's 8-6 win over the Toronto Blue Jays in the fourth inning when he strained his left calf while breaking for second base on an attempted hit-and-run.

"I'm not optimistic at all," Tigers manager Brad Ausmus said. "When Miggy says he can't play, it is serious, because Miggy plays through everything."

Cabrera had an MRI, which showed no injury to his Achilles tendon. He will be examined again Saturday.

"I can't sit here and say we'll be fine, because he's the best hitter in baseball, at least in my eyes," Tigers right fielder J.D. Martinez said. "But if you look at our lineup, we've still got a lot of weapons."

Cabrera's calf injury overshadowed Anibal Sanchez's no-hit bid for the Tigers, which was broken up when former Detroit teammate Ezequiel Carrera lined a single to left with one out in the eighth inning.
Cabrera was on first base with no outs in the fourth inning and a 3-2 count to Victor Martinez, and took off with the pitch. Martinez fouled the ball off, but Cabrera pulled up sharply, grabbing his left leg. He was attended to by trainers and limped off the field.

Sanchez loses no-hit bid in 8th; Tigers hang on
Anibal Sanchez loses his bid for a no-hitter on Ezequiel Carrera's single in the eighth inning and Miguel Cabrera exits in the fourth inning because of a strained left calf as the Tigers hold on for an 8-6 win over the Blue Jays.