Mike Conley out for Game 4, sent back to Memphis for evaluation 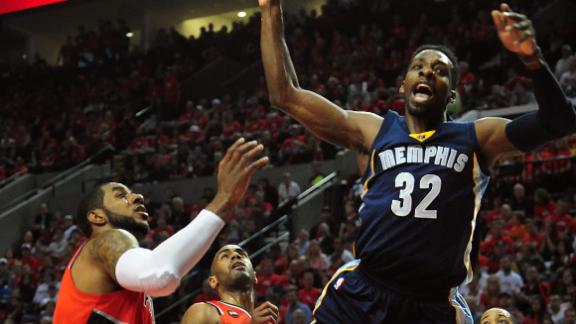 PORTLAND, Ore. -- Grizzlies point guard Mike Conley returned to Memphis on Sunday for further evaluation of a facial injury and will miss Game 4 of the playoff series against the Portland Trail Blazers.

Conley was inadvertently elbowed on the side of his face by Blazers guard C.J. McCollum in the third quarter of Memphis' 115-109 victory Saturday and did not return. Conley was taken to a nearby medical facility for observation but was released Saturday night in time for dinner with teammates.

The Grizzlies have not disclosed the extent of Conley's injury and won't confirm whether the eighth-year veteran has suffered a concussion or some form of facial fracture. Conley was preparing for his flight back to Memphis and was not with the team during the open session of Sunday's practice.

"We've flown him back to Memphis to be re-evaluated, and we should know more about him [Monday]," Grizzlies coach Dave Joerger said of Conley, who had also been dealing with a foot injury in recent weeks. [It feels] awful. He's got the biggest heart. He's the purest heart guy and is a true leader who will do whatever is asked of him. It's a big blow, but we'll know a lot more [soon]."

The Grizzlies, who are 8-4 without Conley this season, hold a 3-0 lead in the series and will try to complete the sweep of the Blazers on Monday.

"We're playing without our primary playmaker, so we've got a lot of work to do," Joerger said. "The series is to four, and they're a very proud organization and they've got some very good players who are very proud. Expect a dogfight tomorrow."

Although Memphis has won seven in a row and 12 of the past 13 matchups against Portland, finishing off the series could be a major challenge without Conley. The Grizzlies are banged up at point guard and were without backup Beno Udrih on Saturday because of an ankle injury he sustained in Game 2.

"With another day of rest it's improved a lot," Udrih said.

Memphis could also rely more on third-string point guard Nick Calathes, who stepped in for Conley on Saturday and finished with 13 points and three assists in 27 minutes.

"For Nick to just be ready like that is big," Memphis forward Zach Randolph said. "This league is about being ready, so when your number is called, you should already be ready. That's what I've been telling the young fellas."

If the Grizzlies beat the Blazers on Monday, they could benefit from nearly a full week of rest before a potential second-round matchup starts against the Golden State Warriors, who advanced after sweeping the New Orleans Pelicans in the first round.

But the more pressing concern during Sunday's workout was Conley's health and how long the Grizzlies might be without their assists leader on the season and second-leading scorer in the playoffs.

"I feel bad," Grizzlies center Marc Gasol said. "Of course I want Mike to be out there because I know how competitive he is and how much he wants to play. But sadly, this is a part of the game. Things happen, and it's a physical game. But he's OK. He was in good spirits."

Head injuries would typically place a player under the NBA's concussion protocol, which would require a series of evaluations and increasingly vigorous tests before being cleared to resume basketball activities.

Last month, Sacramento Kings forward Rudy Gay missed three games over a span of seven days as he was treated for concussion symptoms after he was elbowed in the head March 30 against Memphis. Earlier this season, Oklahoma City guard Russell Westbrook missed just one game but returned to the court five days after he suffered a facial fracture in the final seconds of a Feb. 27 game in Portland.

The Grizzlies have adjusted to Conley's injury absences throughout the season. He has missed time with injuries to both ankles and a sprained wrist before he sat out the final four games of the regular season with a deeply sprained right ankle, an injury he continues to receive treatment for in the playoffs.

"It's definitely a surprise just to keep seeing all of these injuries," Grizzlies guard Tony Allen said. "We turn into a makeshift team. Not one guy can do the things that Mike can do on the court. It's just going to take multiple efforts ... to make up for what Mike brings to the table. We had dinner last night. He looked fined to me. We were so jacked up from [Saturday's] win. All we talked about was the game."