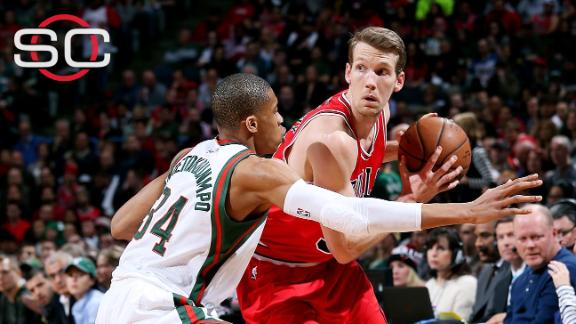 The Chicago Bulls have reached a verbal agreement with veteran forward Mike Dunleavy on a new three-year, $15 million contract, according to league sources.

The agreement, which is fully guaranteed for the first two seasons and partially guaranteed in Year 3, secures Dunleavy's return to Chicago amid strong interest from several teams, including the Cleveland Cavaliers.

"I'm thrilled to be back. It's a really fair deal," Dunleavy told the Chicago Tribune on Wednesday. "I'm looking forward to playing for (new coach Fred Hoiberg) and love our team."

ESPN.com reported Tuesday that the Cavaliers, at the behest of LeBron James, were hopeful of luring Dunleavy away from the Bulls to give them extra shooting and wing depth.

Sources, however, maintained from the start that Dunleavy, who turns 35 by the start of next season, was always likely to stay with Chicago.

The contract can't be signed until July 9, when a leaguewide moratorium on player business is lifted.

Jeff Goodman of ESPN.com contributed to this report.