MLB playoffs 2020: Takeaways from all four of Tuesday's division series 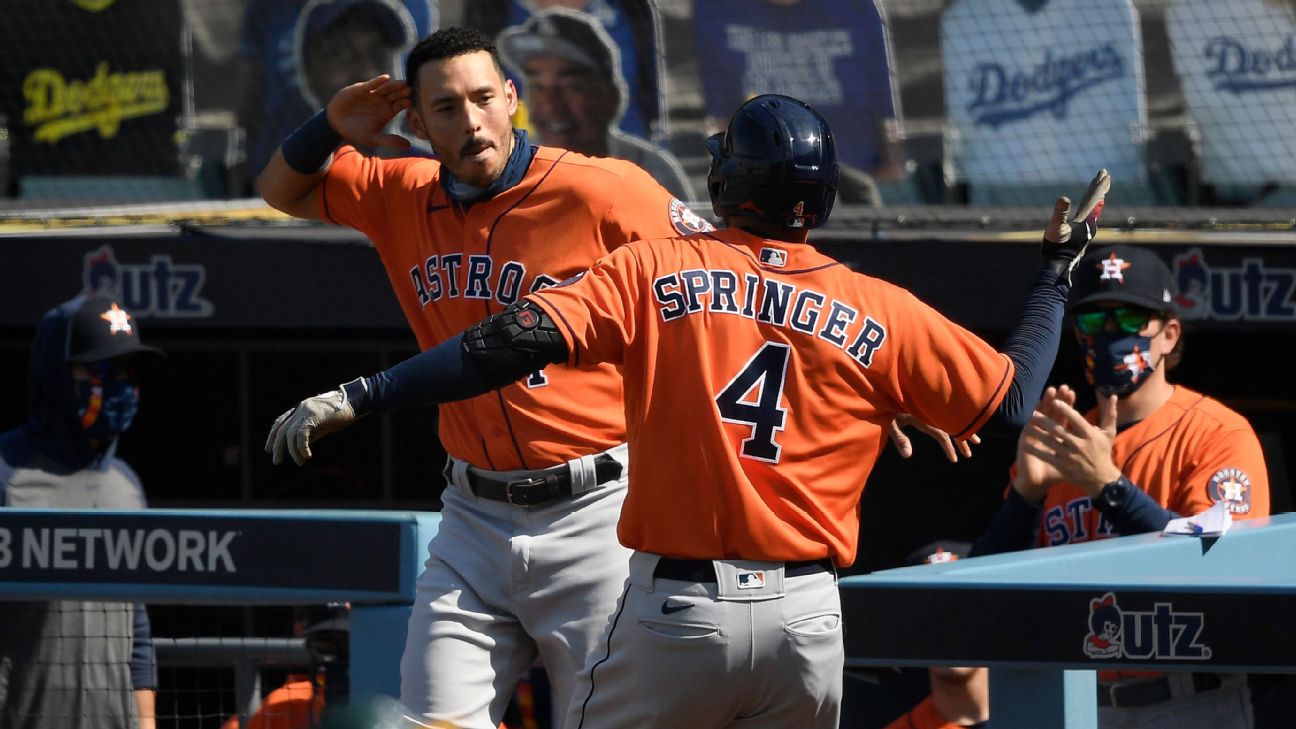 It has been another busy day in the MLB playoffs, with all four division series in action: two series openers in the National League and two Game 2s in the American League.

Here are the stars, turning points and takeaways from each of Tuesday's games as they conclude.

What it means: Here's a statement that's sure to enrage, oh, 99% of America: The Astros are one win from the American League Championship Series. Here's something that should scare what remains of the postseason field: The Astros' offense looks locked in, and in Framber Valdez, who provided seven innings of two-run ball on another homer-happy afternoon at Dodger Stadium, the Astros have what appears to be the equivalent of a top-of-the-rotation starter.

George Springer homered twice and has six hits in nine at-bats in this series, igniting an offense that is more closely resembling recent history. But it's the Astros' pitching that has been particularly impressive. One of the major keys to this series for the A's is to make Dusty Baker deploy relievers not named Ryan Pressly as often as possible. But in Game 1, Blake Taylor, Enoli Paredes and Cristian Javier stepped up. In Game 2, Valdez made the approach irrelevant.

The A's are 1-for-24 in the sixth inning or later in this series. -- Alden Gonzalez


What it means:It was an action-packed Game 1 between the Braves and Marlins, but Atlanta rolled six runs in the seventh inning to grab the series opener. Ronald Acuna Jr. homered to lead off the bottom of the first, then was hit by a Sandy Alcantara pitch in his next at-bat to heat things up in the early innings.Remember, there is history between the Marlins and Acuna.

The Marlins put up four runs on Atlanta ace Max Fried, but things unraveled after the teams got into their respective bullpens. The Braves hold a massive advantage in that area and have a much more dynamic offensive attack. The margin is thin in this series for the Marlins, but they've been as resilient as a team can be. That will be put to the test in Game 2, whenPablo Lopez will try to even things for Miami against Atlanta's Ian Anderson.

For the Braves, that they got a subpar outing from Fried and still won a playoff game going away tells you all you need to know about how well-rounded this Atlanta squad is. --Bradford Doolittle

What it means:The game that started with a bait-and-switch ended with a bang.

The Rays evened the American League Division Series at a game apiece by giving the Yankees a big dose of their own home run medicine. Homers by Randy Arozarena, Mike Zunino and Manuel Margotand another solo shot by Austin Meadows, who the Rays thought might be finished for the season after he suffered an oblique strain in mid-September, wrapped the 7-5 win. Tyler Glasnow struck out 10 of the 18 Yankees fanned by the Rays' pitching staff, a new MLB postseason record for a nine-inning game. Glasnow's Achilles' heel was slugger Giancarlo Stanton, who had two of the three hits given up by the hard-throwing righty, both of them home runs, including a 118.3 mph blast in the fourth. Stanton became the first player to hit five home runs and record 10 RBIs in a four-game span in one postseason.

The Yankees sent rookie right-hander Deivi García to the mound to start Tuesday night's game but allowed him to pitch only one inning in what appeared to be a strategy to control the Rays' lineup composition. That backfired when New York brought in J.A. Happ in the second inning, and the veteran lefty gave up four runs on five hits (two home runs) over 2 2/3 innings.


The Yankees will stay away from gimmicks and send playoff ace Masahiro Tanaka to take on the AL East champions in Game 3. Tanaka, who had a 1.76 postseason ERA before his weather-tainted start in Cleveland, is the Yankees' only hope of avoiding going down 2-1 in a no-days-off, best-of-five series against one of the deepest pitching staffs in the majors. -- Marly Rivera

What it means:On the 115th pitch they saw, the Dodgers finally registered a hit. For 5 1/3 innings, a panoply of Padres pitchers were crafting what might have been the ugliest no-hitter of all time -- a walk-fattened, reliever-stuffed, caterpillar crawl to the end. Mookie Betts ended it with a double,Justin Turner,Max Muncy and Cody Bellinger followed with hits of their own, and just like that, the Dodgers were on their way to a 5-1 win and a 1-0 NLDS lead. It happens quickly with them, and now that Mike Clevinger is shelved after he couldn't make it to 25 pitches in his Game 1 start, San Diego faces a scary reality: Without either of their best starters, with a bullpen that got taxed heavily in the first game and with games scheduled the next four days, the Padres need to beat the best team in baseball three times before it beats them twice. -- Jeff Passan 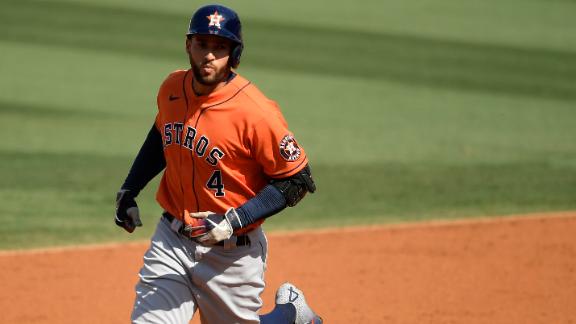 Springer blasts two dingers as Astros take 2-0 series lead over A's
George Springer cashes in on two home runs as the Astros defeat the Athletics 5-2 in Game 2 of the ALDS. 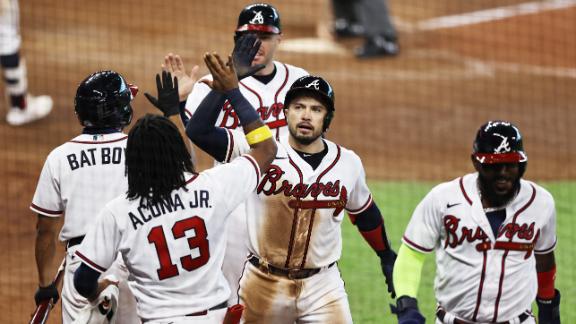 Acuna, d'Arnaud and Swanson all go yard in Braves' win
Ronald Acuna gets things started with a first-inning home run. In the seventh, Travis d'Arnaud and Dansby Swanson crank home runs, helping the Braves to a Game 1 win. 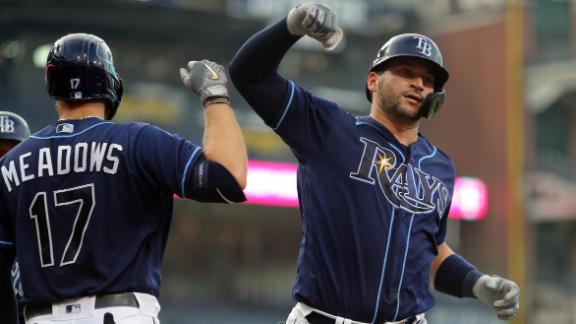 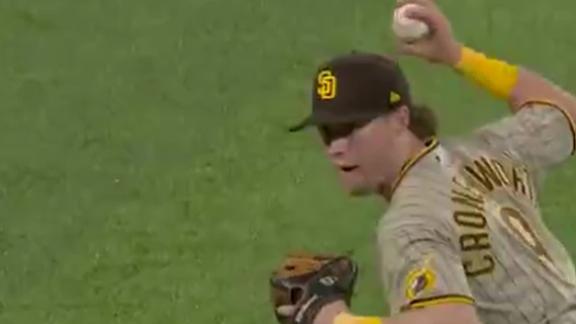