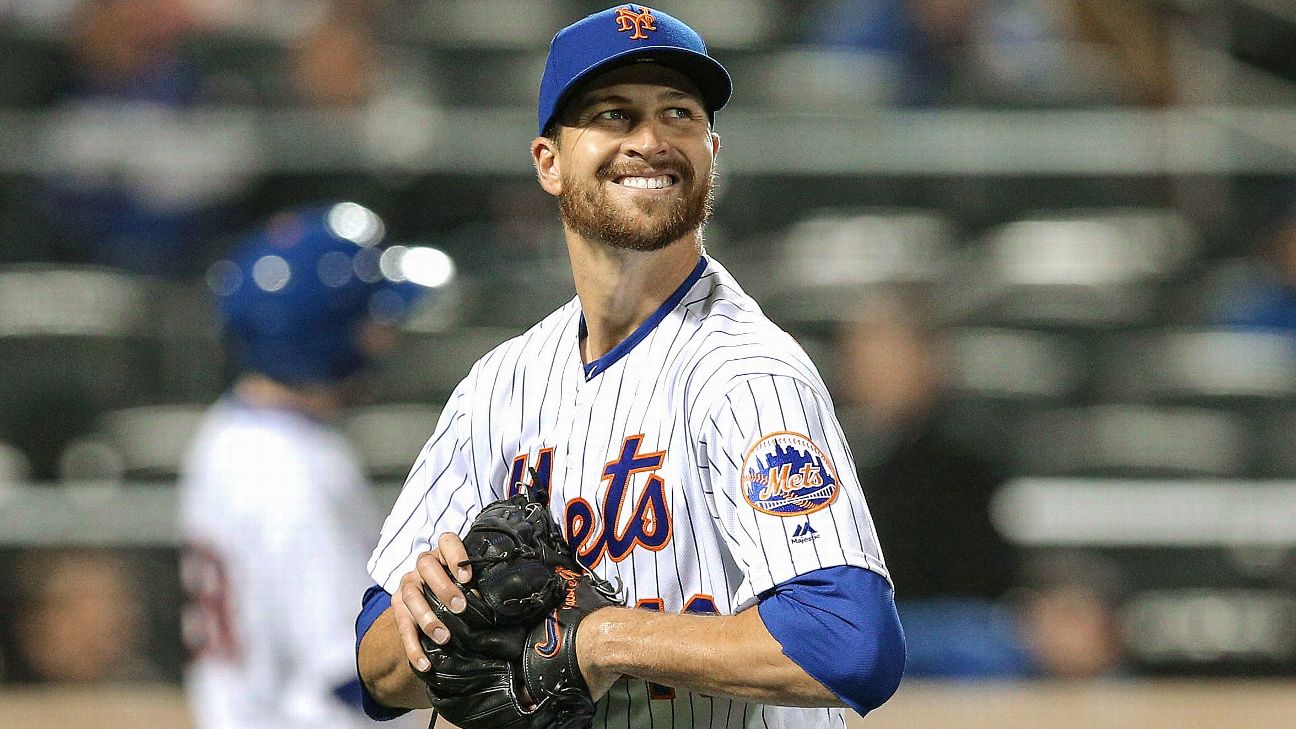 Baseball season is really here, and as we settle in to the daily smorgasbord of storylines and matchups, we wanted to help focus your attention this weekend. We've asked three of our writers the key questions about what to watch for and to make some predictions about what's to come.

Every Jacob deGrom start has become appointment viewing, and the Mets ace faces the Braves this weekend on Sunday Night Baseball (ESPN, 7 p.m.) Which starting pitcher in what season was the most "must-see" of your lifetime?

Eddie Matz: With apologies to 1999 Pedro Martinez and 2016 Max Scherzer, I've got to go with Steve Stone in 1980. I mean, I was in fourth grade and in love with the Orioles, and Stone won 25 games back when wins were everything. And don't get me started on that curveball of his.

David Schoenfield: In 1985, I was 16 and a Mariners fan, but there was nothing like watching 20-year-old Dwight Gooden make major league hitters look like Ogilvie from "Bad News Bears" at the plate. Of course, I lived 3,000 miles from Queens so I didn't exactly get to see Gooden pitch many games that year unless the Mets appeared on the "Game of the Week" or "Monday Night Baseball." (Did "Monday Night Baseball" still exist in 1985?)

That was the year we got cable TV, so I would stay up late to watch the highlights on SportsCenter. Sometimes I would even record the show on VHS tape (ask your parents, kids) just to see how Gooden fared. Otherwise, it was waiting for the box score in the newspaper the next day (ask your parents what a newspaper was as well). And what a season it was: 24-4, 1.53 ERA, 16 complete games and eight shutouts. Somehow, he didn't win MVP honors.

Sam Miller: Stephen Strasburg's 2010 stands out. He was 21, arguably the best pitching prospect in baseball history, barely a year out of college, with a 1.30 ERA in the minors and three pitches that all seemed like they might be the best single pitch in the sport. And then he showed up in the majors and was as good as promised: In his major league debut, he struck out 14 and walked nobody, something that only 62 pitchers in history have ever done in any start in their career. (Sandy Koufax, Tom Seaver, Justin Verlander each did it once; Stras did it in his major league debut!) His FIP in 12 starts as a rookie is the 11th best FIP by a starter in my lifetime, his strikeout rate the 18th best. We were watching the greatest pitcher in history, I was sure of it. As with many things we are sure of, I was wrong, but at the time ...

The Brewers and Dodgers have cooled a bit after great starts as they square off in a rematch of last year's National League Championship Series. Pick one player from each team whose performance will most determine whether his squad gets back to the NLCS -- or beyond.

Matz: Josh Hader. With Jeremy Jeffress on the shelf and Corey Knebel out for the season, the Brewers' bullpen begins and ends with Hader. As for the Dodgers, I don't see them having much of a problem winning the NL West. So really, this question comes down to who has a huge NLDS for them. My spidey senses tell me that it's going to be Kike Hernandez.

Schoenfield: Clayton Kershaw is the easy answer for the Dodgers, but it feels like the best answer. The Dodgers are going to score runs, and with their rotation depth, they can win the division with or without Kershaw, especially given the early train wreck that is the Rockies. But to get to a third straight World Series? That's where Kershaw comes in.

For Milwaukee, I'm locked in on Freddy Peralta. Is he a viable option in the rotation? Can he succeed as sub-6-foot right-hander? Can he succeed throwing 80 percent fastballs like he has so far? The early returns are mixed: one not very good start, one of the best starts in Brewers history, one terrible start.

Miller: This is probably not literally the answer, but it feels like the right one, so: Kenley Jansen. All indications are that the Dodgers will have a fairly easy path to the postseason, with tons of overlapping parts inoculating them against injuries or underperformance in both the rotation and lineup. But closers aren't always easily replaced, and ninth-inning collapses are (anecdotally, at least) an infection. If you told me the Dodgers somehow won only 84 games this season, I'd bet a bullpen void was a big part of that.

If you factor in framing stats, Yasmani Grandal has been as good over the past three or four years as Christian Yelich and Lorenzo Cain. He's famous for his streaks -- and folks tend to focus on the cold ones -- but over the course of the season he should be one of the best-hitting catchers in the league, could plausibly erupt for a .900 OPS, and will earn his young pitching staff copious strikes.

The prohibitive American League West favorite Astros are in Seattle to face the first-place Mariners. What are the chances these two will be duking it out for the division come September?

Matz: Zero. The Astros won't be duking it out with anybody. The only dukery will be between the teams that are fighting for second. If Tim Beckham continues to hit .400 and Domingo Santana keeps up his 200-RBI pace and Marco Gonzales never loses again, then maybe the Mariners weasel their way into a wild card. All that said, I picked the A's to finish second in the West and I'm never, ever changing my mind. (Not yet, anyway.)

Schoenfield: Zero? Come on, Eddie, show the M's a little love from the East Coast. The Mashin' Mariners are locked in. Dan Vogelbach is the new Prince Fielder. Mallex Smith and Dee Gordon are the 2019 version of Vince Coleman and Willie McGee (speaking of 1985!). Edwin Encarnacion's parrot loves the Pacific Northwest. If the 2018 A's can push the Astros, maybe the 2019 Mariners can also come out nowhere and do the same. (OK, the Astros won't be duking it out with anybody.)

Miller: Does a kite "duke it out" with the wind? From the kite's perspective, maybe, but the Astros are a gale. They will not write books about the 2019 AL West race. Seattle has managed to trim the Astros' chances of winning the division (according to Baseball Prospectus' playoff odds) from 89 percent to 88, so we can award the Mariners "Kite of the Month" or whatever.

When considering this weekend's schedule, what's the one thing -- a game, an individual matchup, anything -- you most want to see?

Matz: Snellzilla takes Toronto. Last season, Blake Snell dominated the Blue Jays. OK, so he dominated everyone, but the reigning Cy Young was especially lethal against the Jays, posting a 0.54 ERA with 27 K's in 16 innings. Against a 2019 Toronto team that's at or near the bottom of pretty much every offensive category so far, anything is possible. Heck, maybe Snell even gets his first career complete game.

Schoenfield: Astros at Mariners, of course! This will be a tougher test for the Mariners than the White Sox or Royals (or lowly Red Sox). Seattle actually won the season series from Houston last year, 10-9.

Miller: This early in the season, it's especially fun to see the range of outcomes for high-variance starting pitchers (those who are young, who have seemed to be breaking out, who are returning from surgeries, who have incredible stuff/shaky control) begin to narrow. So I'm looking forward to Friday's slate of starters: Jose Urias, Zack WheelerandChris Paddack, all of whom contain real ace potential and a bunch of unresolved questions.

Last weekend, Mike Trout's OPS posted a ridiculous 2.631 OPS against the Rangers, the third-highest ever for a four-game series. This weekend Trout and the Angels have a three-game set with the Cubs at Wrigley Field.

Matz: As bad as Cubs pitchers have been this season (worst in the NL), no opposing hitter has recorded an OPS that high against them. Not even Christian Yelich. The closest was Ozzie Albies, who posted a 1.667. All of which is to say, 1.850 is a really high number for anyone -- even Trout. I'll take the under.

Miller: Under, because no matter how much you like a guy, 1.850 is ridiculous. In his best year, Barry Bonds' OPS on three-ball counts was only 1.700. We should have picked a lower number.

Total runs allowed by Scherzer, Snell and deGrom: Over or under 5.5?

Matz: Trick question. Scherzer might not start after getting drilled in the leg by a liner in his last outing. Under, please.

Miller: Snell's going to take a no-hitter into the seventh. Under.

What's your pick for Sunday night's game -- the Mets, with deGrom coming off his first bad start in a millenium, or the Braves and their young studs?

Matz: It's Max Fried's last start before Passover begins. I'm not exactly sure what that means, but as history has shown us time and again (and most recently in the last World Baseball Classic), never bet against the Jewish people. Braves, please.

Schoenfield: I love what Max Fried has done his past two starts, but that win against Colorado came against a lineup that more resembled the Albuquerque Isotopes than the Rockies. I'll take the Mets.

Each week, we'll ask our panelists to choose one hitter they think will hit the most home runs and one pitcher they think will record the most strikeouts in the coming weekend. Panelists can pick a player only once for the season. We'll keep a running tally -- and invite you to play along at home.