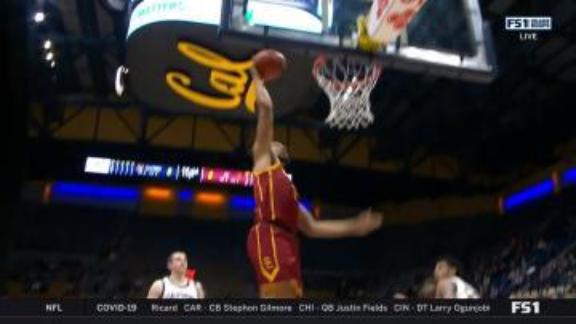 BERKELEY, Calif. -- - Isaiah Mobley had 19 points and nine rebounds and sparked a late surge to help keep No. 7 Southern California unbeaten as the Trojans held off California 77-63 on Thursday night.

Playing for the first time in nearly three weeks after having three games postponed or canceled due to COVID issues, USC (13-0, 3-0 Pac-12) pulled away with a pair of big runs in the second half to extend its best start since winning its first 14 in 2017.


The Trojans remained mostly isolated during their delay and only had a handful of practices together before resuming their schedule.

"Guys just tried to stay as ready as they could through the quarantine process," Mobley said. "There wasn't much we could do but a lot of guys were watching film, trying to fix the stuff they could work on. Of course we were a little rusty but we just kind of came together and we're starting to catch a flow where everyone's being aggressive, everyone's showing up."

The rust showed early against Cal, but USC coach Andy Enfield found little else to complain about.

"I was worried about our offensive rhythm but we found it pretty quickly," Enfield said. "Once we started defending at a higher level, we took the lead. Our defense in the second half was outstanding."

Mobley, who opened the game with a thunderous one-handed dunk, made several clutch jumpers and repeatedly attacked the Golden Bears defense in the paint. Drew Peterson scored a season-high 17 points for the Trojans, and Boogie Ellis added 14 points and four rebounds.


The Golden Bears lost despite becoming the first team to shoot better than 40% against the Trojans.

"We didn't play well enough to beat a top-10 team tonight," Cal coach Mark Fox said. "We didn't rebound the ball in the first half and then in the second half we didn't force enough stops to even have our rebounding be exposed. They wore us out on the interior and that was more disappointing than surprising."

Mobley scored 12 points in the first half and had a 36-31 halftime lead, but USC couldn't shake the Bears until the second half.

Ellis scored on a pair of driving layups as part of a 10-4 run to open the second half and give the Trojans a 46-38 lead. After Cal closed to 54-50 on Anticevich's baseline jumper, Mobley powered in from the key then hit a 3-pointer to ignite a 16-5 surge.

"Coach has been telling me to stay aggressive, choose my moments but stay aggressive," Mobley said. "Once we got the flow, my teammates believed in me and they put me in the right positions to score."


Southern California: The sluggish start can be written off thanks to the lengthy layoff, because once the Trojans found their rhythm, they looked fine. Mobley kept the offense going and Peterson provided a big lift, connecting on a late 3-pointer to put the game away. USC is looking at another possible break due to COVID-19 in an opponent, but isn't likely to be as long as the previous one.

California: The Golden Bears had won their last nine home games and put up a decent fight against a ranked team that was clearly superior. Mark Fox's team needs to work on the boards, but the program in general is looking up.

Southern California: The Trojans were scheduled to play at Stanford on Saturday but it has been postponed due to ongoing COVID-19 issues within the Cardinal's program. There is a possibility that the game could be rescheduled for Tuesday, which would force USC to play three games in one week.

California: Faces No. 5 UCLA at Haas Pavilion on Saturday. It marks the first time since 1975 that the Bears have faced two Top 10 teams in the same week.