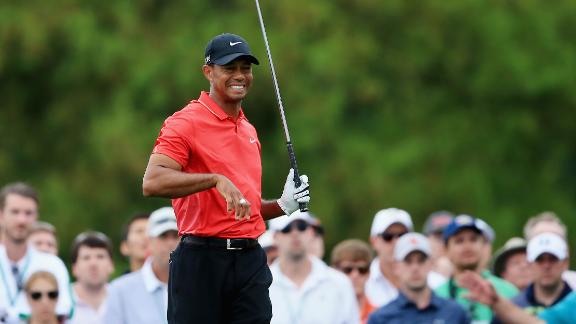 AUGUSTA, Ga. -- Another injury setback loomed for Tiger Woods when he slammed an iron into a tree root attempting to hit a shot on the ninth hole Sunday, leading to some tense moments as he clearly proceeded in distress.


But Woods shook it off -- saying he popped a ligament back into place in his right wrist -- to shoot a 1-over-par 73 and complete his first tournament of 2015.

He ended up tied for 17th, his best finish in more than a year, and looking positively toward the future -- but with a sore wrist he's fortunate is not worse.


"It hurts; it definitely hurts," Woods said after finishing the tournament at 5-under-par 283 -- 13 strokes back of winnerJordan Spieth. "I didn't know there was a tree root there. I drilled the club straight into it. It didn't move, but my body kept moving. There's a little joint that popped out, and I was able to somehow put it back in, which didn't feel very good.


"At least I got it back in; I could move my hand again. It's sore. I'm not going to be lifting any weights for a while."


Woods, 39, playing in his 20th Masters, began the day with hopes of putting pressure on Spieth but realistically pushing for a top-5 finish that would help him climb out of the world ranking depths; Woods had dropped to 111th in the world heading into the Masters. He moved up to 101st on Sunday.


But he failed to convert birdie putts at the second and third holes, bogeyed the fourth and seventh, didn't make his first birdie until the eighth and ran into the issues at the ninth, which lingered for a few more holes.


Woods did eagle the 13th hole -- one of just two fairways he hit during the final round -- and added a birdie at the 15th but couldn't keep the bogeys off his card at the 14th and 18th holes.


But all things considered, it was a strong showing from Woods, who didn't announce he would play the Masters until nine days ago.


"Considering where I was at Torrey and Phoenix, to make that complete change and the release pattern, I'm pretty proud of what I've done," Woods said. "To make my short game my strength again was pretty sweet. That's something that I've worked my butt off to get to that point.


"And no one knows how hard we had to work to get to this point, but I'm very pleased. This is my first tournament back, being a major championship, and to give myself a chance, it felt good."


One person Woods has credited has been Chris Como, his swing consultant since November. Not only did Como work on changes to Woods' long game, but he also had to do emergency work on the short game that appeared utterly hopeless the last time Woods played in February.


Said caddie Joe LaCava: "He didn't have his best stuff today. He hit only two fairways. What do you expect? But I'm happy with 72 holes. Happy with making the cut. It's progress."


It was the first time Woods completed 72 holes in an official U.S. event since the 2014 WGC-Cadillac Championship, where he tied for 25th. A few weeks later, he underwent back surgery, and since then he has played just eight worldwide events and just three this year.


During that stretch, he withdrew from two tournaments and missed the cut in three others.


Woods began the final round in a tie for sixth and played with Rory McIlroy, who shot a final-round 66 to post his best Masters finish, fourth.


While McIlroy came in trying to win a third straight major and complete the career Grand Slam, Woods was just looking to find some form. He surpassed expectations for the week, which started with many wondering whether he could make the cut after a two-month absence.


But Woods shot consecutive rounds in the 60s on Friday and Saturday and spoke about being proud of getting back into this position.


"I was pleased with the way I hit the ball this week," Woods said. "I've got my pop back. And then on top of that I got my short game back, which was nice."


A top-4 finish or thereabouts might have moved Woods up enough to be eligible for the WGC-Cadillac Match Play Championship in three weeks, but he is not playing the coming week's tournament in Hilton Head, South Carolina, which is the final tournament for eligibility.


So Woods likely will take the next three weeks off and return for the Players Championship, which he missed last year but won in 2013.

Tiger injures wrist, finishes tied for 17th
Tiger Woods injured his wrist when he caught a tree root with an iron shot on the ninth hole of the Masters, but still managed to shoot a 1-over par 73 to finish tied for 17th at the Masters.