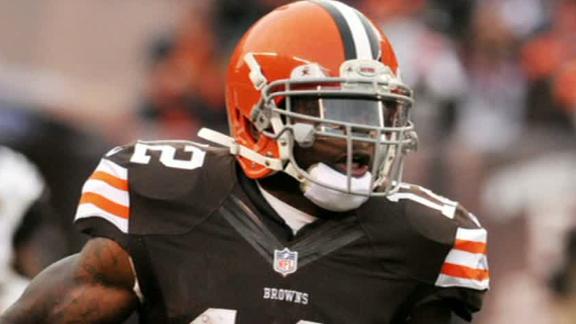 CLEVELAND -- The Cleveland Browns are aware Pro Bowl receiver Josh Gordon, facing a possible NFL suspension for another failed drug test, was ticketed for speeding last weekend. A passenger in his car was cited for marijuana possession.

Gordon is facing a season-long suspension after another failed drug test months ago, this time for marijuana, sources told ESPN's "Outside the Lines" earlier this month. Gordon was suspended two games last season for failing a drug test.

Gordon was pulled over for driving 74 mph in a 60 mph zone on May 25, WKYC-TV reported Friday. According to the report, the passenger in Gordon's Mercedes was issued a citation for possession of marijuana in an amount under 200 grams. The marijuana was found in a blue bag with identification. The passenger said the marijuana was not Gordon's.

"We are gathering information regarding the situation," Farmer said. "We will not have any further comment until the appropriate time."

Gordon's pending case is posted online on the Berea Municipal Court docket. It says Gordon showed proof of insurance when he was stopped and that he did not have any warrants. He is due to appear in court on June 4.

The traffic stop comes as the Browns are awaiting news whether Gordon will be available to play this season. The talented 23-year-old was suspended two games last season for failing a drug test and still led the league with 1,664 yards receiving.

Gordon has been practicing with the Browns as he awaits word from the league on the possible suspension. Gordon has declined to comment at the workouts that have been open to the media the past two weeks.

Last year, Gordon was convicted of two traffic offenses after pleading no contest in court. He was ticketed twice for speeding, once for driving 98 mph. He paid $296 in fines and court costs.