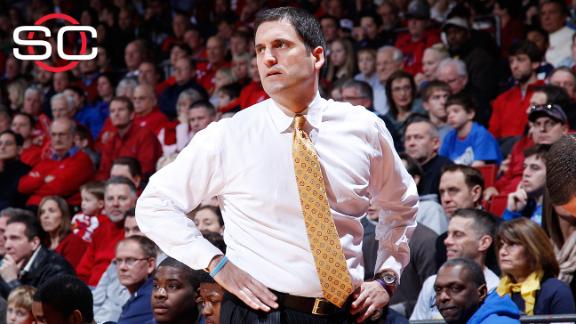 Prohm, 40, was 104-29 in four seasons since taking over at Murray State. He led the Racers to the NCAA tournament in his first season and was undefeated in Ohio Valley Conference play this past season before losing in the conference tournament.

Prohm was passed over by Alabama in April in favor of former NBA head coach Avery Johnson,but he wound up being the selection to replace Hoiberg, who left for theChicago Bulls.

"We feel Steve and his family are a perfect fit for Iowa State University," ISU athletic director Jamie Pollard said in a statement. "Steve's personal values, style of play and proven success as a head coach make him an outstanding choice to be our next coach.

"He is a proven winner who is widely respected by his current and former players. We feel Steve is the ideal coach to continue the incredible success that Coach Hoiberg and his players have achieved during the past several years."

Iowa State, the two-time defending Big 12 tournament champion, is projected to be a top-10 team and a challenger to Kansas next season in the conference. The Cyclones return Georges Niang, Jameel McKay and Monte Morris in their quest to get further than the round of 64 upset loss to UAB this past season.

Cameron Payne, Prohm's top player this past season at Murray State, declared early and could potentially be a lottery pick in the NBA draft on June 25. Prohm also coached current NBA player Isaiah Canaan, who helped lead the Racers to a 32-1 record in 2011-12.