Nadal, Ferrer to face off at French 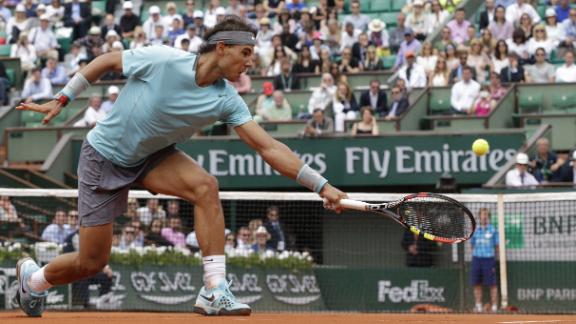 PARIS -- For the first time in his career, Rafael Nadal will make a fifth straight appearance in the French Open quarterfinals.

Nadal won a record 32nd straight match at Roland Garros on Monday, beating Dusan Lajovic of Serbia 6-1, 6-2, 6-1 to improve on his own record by one.

In April, Ferrer beat Nadal on clay in the quarterfinals in Monte Carlo.

"Always when you have a loss in the last confrontation, that can (have an) effect. Or not. I don't know," Nadal said. "I will tell you after tomorrow. But at the end, important thing for me is I am in quarterfinals here."

Nadal is an eight-time French Open champion with a 63-1 record on the red clay in Paris. His only loss came in the fourth round in 2009, when he was a four-time defending champion for the first time.

Another upset never seemed possible this time, despite complaints of pain in his back that slowed his serves in the previous round.

"I don't want to talk too much about this thing today," Nadal said of his injury. "I have important match to come. Today I won a match in good shape. We'll see what's going on in the future."

Playing on Court Philippe Chatrier, Nadal's favorite court in the world, the top-seeded Spaniard controlled the match from the start. He then won 17 straight points to open the second set, taking a 4-0 lead before finally sending a backhand wide to make it 15-15 in the fifth game.

Later in that set, Lajovic held three break points at 0-40, but Nadal saved them all and held. It wasn't until late in the third, with the match far out of reach, that Lajovic did manage a break -- the only game he won in the final set.

"I played with no mistakes and having the control with the backhand, with the forehand from the baseline," Nadal said. "Sure, you never know what's better, but in theory, the theory says that it's better win like this than win longer matches."

Nadal has won 13 major titles, and is the only man to win eight at one of the four Grand Slam tournaments. With another championship at Roland Garros this year, he will become the first man to win five straight French Open titles.

The Spaniard, who turns 28 on Tuesday, has lost only 23 games through four rounds, only four more than he lost in reaching the quarterfinals in 2012.

Also Monday, Andy Murray will be on court a day after he completed a five-set win over Philipp Kohlschreiber. He will play Fernando Verdasco of Spain.

Nadal Rolls Into Quarters
Rafael Nadal beat Dusan Lajovic 6-1, 6-2, 6-1 to advance to the quarterfinals of the French Open, where Rafa will face David Ferrer.

Nadal On QF Match vs. Ferrer: It Will Be Very Tough
Brad Gilbert talks to Rafael Nadal after his straight-sets win over Dusan Lajovic and look ahead to his quarterfinal matchup against fellow Spaniard David Ferrer.