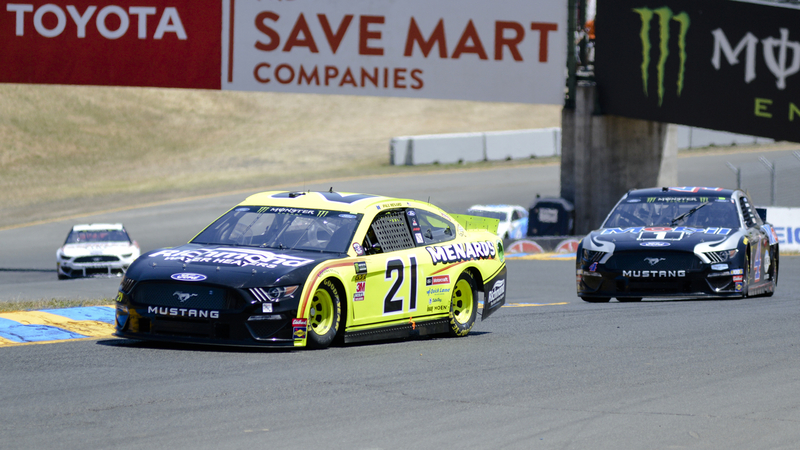 SONOMA, Calif. (KGO) -- At Sonoma Raceway, as elsewhere, we have entered the first week of summer, and you know what that means.

"The speed, the sound," Brian Forsgren could hardly contain his excitement while standing along a chain link fence, watching cars blur by.

NASCAR has returned to Sonoma Raceway, attracting fans, flags, and a pop-up city of recreational vehicles. We even saw kids splashing in a portable swimming pool.

"It keeps them cool and occupied," said grandma.

Pit row, also known as 'the hot zone', is even louder and more intense.

Among unwritten rules in the garage...no peeking under a rival car's engine, or underneath. Trade secrets. Okay. #SonomaRaceway #NASCAR @Racesonoma #abc7now pic.twitter.com/usgUbgfbwQ

"Couldn't think of another place I'd rather be right now," said Jim Kollenborn, who came here with his son, Trevor. They race, too, on a short track in Cloverdale.

"I can't think of any place I would rather be, right now," said Trevor.

So, how about inside one of those team trailers?

"That's where the back-up car lives right there," pointed Matt McCall at a hole in the ceiling. He's the crew chief for Kurt Bush's #1 car. The team agreed to show us around briefly as long as we didn't ask too many questions.

We spent considerable time up close and personal in the pits today. That's Matt McCall of the #1 car. He's in their trailer/office/headquarters, pointing to their spare racing car...in the roof? Yep. #abc7now #SonomaRaceway @RaceSonoma #abc7now pic.twitter.com/AUfOTuXxt1

"So, you put a different suspension on the car this week?" we asked Bryce Seale as he tweaked a shock absorber.

"Yes. Quite different," he said.

"You're not going to tell us how different?"

Back outside we went.

If you follow racing, then you know that when NASCAR comes to Sonoma, they run on a road course, not an oval. It's completely different than the normally left-turn-only set-up for these cars anywhere else.

To work with these cars at this level, a person needs gear-headedness at a genius level-- add computers, engineering degrees, and instinct. Most of them have been in and around racing since childhood.

"With a simple adjustment of a cam shaft and cylinder design we can get more power to a lower range," said Bobby Dell, who takes care of the engines for this team.

Again, no specifics. He grew up in Flint, Michigan. His father worked for General Motors.

The #1 car's team is secretive about tire pressures, brakes-- and extremely sensitive about spies. In the garage, where every team works next to their competition, the unwritten rules include no pictures of chassis under the cars, or of wheel mounts and brakes without tires. The cardinal sin? Peeking under a rival car's hood, even though that engine might last two races under ideal circumstances.

"It's just proprietary routing of wires that other teams would like to see for themselves," said Dell.

"Proprietary, as in?" As if we'd know what we're looking at.

When a tenth of a second may make a margin of victory, can you blame them?
Report a correction or typo
Related topics:
sportssonomasonomanascarrace car
Copyright © 2021 KGO-TV. All Rights Reserved.
More Videos
From CNN Newsource affiliates
TOP STORIES